The ACLU recently published You are being tracked:  How license plate readers are being used to record Americans' movements, in which the proliferation of ALPRs [Automated License Plate Readers] among law enforcement agencies nationwide is discussed:

The implementation of automatic license plate readers poses serious privacy and other civil liberties threats.  More and more cameras, longer retention periods, and widespread sharing allow law enforcement agents to assemble the individual pieces of where we have been over time into a single, high-resolution image of our lives.  The knowledge that one is subject to constant monitoring can chill the exercise of our cherished rights to free speech and association. Databases of license plate reader information create opportunities for institutional abuse, such as using them to identify protest attendees merely because these individuals have exercised their First Amendment-protected right to free speech.

You can and should read the entire ACLU report (or at least the summary article here), but today's subject is what is happening in Delaware, and how law enforcement agencies are skirting both the Freedom of Information Act, but also the law in order to (a) maintain a massive surveillance effort that extends to tracking the movements of law-abiding citizens; and (b) shares that information with multiple partners (both public and private) across the region and that nation.

The primary sources for this report are the responses of the New Castle County PD and the Delaware State Police, sent in mid-2012 in response to ACLU FOIA requests.  You can find the URLs for these documents in the ACLU report, but I will warn you that they are marred by the addition of superfluous spaces in several places, and that you have to fiddle with them for awhile to make them work (or you can just use my links, which I have corrected).

Start with the New Castle County PD, which informed the ACLU on 31 August 2012 of the following:

1--NCCPD deploys 10 mobile ALPRs.
2--NCCPD has NO policy for the use of these ALPRs, except a reliance on DELJIS Directive #1 on the dissemination of motor vehicle information.
3--NCCPD collects an average of 448 license plate numbers per day, keeps the ones that have no specific criminal charges lodged for 360 days, and in the year preceding 24 August 2012, collected 164,431 scans.
4--NCCPD claims that these records are stored in a "standalone database," and that no bulk data-sharing agreements exist with other agencies [in other words, that partners cannot go shopping or mining in the NCCPD database].

As we shall momentarily see, while most of this is literally true, there is a significant amount of deception involved in that truth.

First, it is important to know that while hundreds of plates are scanned each day, NCCPD asserts that it takes no action except for those plates with a positive hit on its "hot list."

The data obtained by the ALPR units include: the license plate number, time stamp, scan (photo of the tag), overview (photo of the vehicle), user login, latitude and longitude of the unit. If the tag number is on a "hot list" the data also include the "hot list" name and the following information from the "hot list": state of registration, year, make, model, and vehicle type, ORI of the entering agency and NCIC entry number if the hit is from the NCIC hot list. If the tag is from the Delaware stolen vehicle hot list, date will also include the complaint number. If the hot list is the Delaware Wanted Persons File, the wanted person's name and date of birth are included.

Notice what they do NOT say:  what qualifies a vehicle plate number to be on their Hot List (nor does the aforementioned DELJIS Directive 1 cover that in case you wondered).

We know from the paragraph that the Hot List includes stolen vehicles and wanted persons from the context of the paragraph, but that's about it.

The reality is that NCCPD can put ANY category on the Hot List at any time and use it as a justification to track any vehicle.

This is critical to understand.  Even if NCCPD says, at any time subsequent to this letter, that these are the only categories we use on the Hot List, there is nothing binding or lasting about the decision to place any category on the list.  Yeah, they could limit it to stolen vehicles or wanted persons, but they could also go after unpaid parking tickets, delinquent child support, or even membership in organizations that NCCPD might have decided to shadow or observe (hello Greens and Campaign for Liberty).  Are they doing that?  We don't know, and under current laws, they don't have to tell us.

We also know that M. Edward Danberg (the Assistant County Attorney who answered the ACLU FOIA request) palmed a card when he replied to the question about data-sharing agreements.

Because NCCPD has granted access to the database to officers assigned to the US Marshall's Fugitive Task Force, this means that the Delaware Information Analysis Center [Delaware's own homegrown "fusion" center about which I have written extensively] has indirect access to all this data at literally the touch of a keyboard.  And what DIAC has access to, the Delaware Valley Fusion Center can access, which means that virtually any law enforcement/homeland security in the country can access.

So the original examination of NCCPD use of ALPRS finds that loopholes abound, particularly in the area of (a) policy; (b) oversight for abuse [non-existent]; and (c) data-sharing.

What about the Delaware State Police?  To be candid, DSP's response to the FOIA inquiry makes the NCCPD answer look like a model of integrity.

DSP informed the ACLU on 20 August 2012 of the following [I omitted all the numbers where they said they did not have any data]:

Paragraph number 1 would imply that all ALPRS units purchased or owned by the DSP are for the "Motor Carried Safety Program," and--if you read the voluminous grant application attached--are to be limited to the following usages:

That would seem to be pretty limited, right?  The DSP claims it is only using these devices to ferret out illegal commercial vehicles.

Not so fast.  DSP also included its use policy for ALPRs, and there are two very interesting facets to this policy.

The first is that the ALPRs policy of the Delaware State Police says ABSOLUTELY NOTHING about the use of such devices for the policing of commercial vehicles.  NADA.

Instead, the policy concentrates on the use of such devices mounted on patrol cars (which, according to the response to the ACLU they don't have).

More to the point, DSP is quite clear in this policy that the uses for ALPRs are much MUCH broader than implied in their Federal grant paperwork:

Got that?  Units are mounted in patrol vehicles looking for Hot List numbers in categories defined by "The Executive Staff"--which has no policy or statute limitations on what categories that Hot List may contain.

In other words, when the DSP stated in response to ACLU inquiry 1 that it only deployed ALPRs for enforcing commercial vehicle codes, the agency--at best--so narrowly interpreted the question that it misled the intent of the FOIA request.

That's a polite way of saying the DSP lied.

As for paragraph 6 on data sharing (and they keep their data on you for FIVE YEARS), DSP policy says this:

That sounds good until you realize that the intelligence analysts working in DIAC are DSP officers.

So any DIAC inquiry is an "active investigation" by a DSP officer.

So, again, politely put, DSP intentionally misled the ACLU in its FOIA response.

Ironically, I can substantiate that fact by the DSP's own PUBLIC REPORT for 2012 in which it brags of the data-sharing capabilities that it denies to the ACLU: 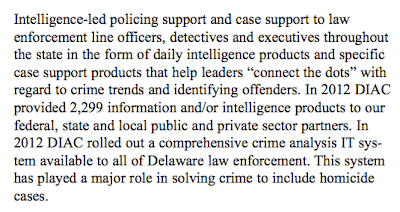 Or, if you prefer, there's the testimony to the US Senate Judiciary Committee in which the DSP State Superintendent brags about:

In other words, the claim that the DSP has no data-sharing agreements with any Federal Agencies is a lie so easily contradicted that this means they really don't care if you know the truth.

Because it doesn't matter.

There currently is NO formal civilian oversight of the activities of our local police departments, the Delaware State Police, the Office of Safety and Homeland Security, and--ESPECIALLY--the DIAC.

Think about it this way:  given the disparity of resources between the NCCPD and the DSP, if the NCCPD is capable of saving 164,000+ license plate images (with all attendant data) for one year, how many is the DSP saving for FIVE years?

Why is that a bad thing?  Ask any veteran civil rights marcher from the 1960s what would have happened to them had the Mississippi and Alabama cops had the kind of data capture technology we've allowed to be handed to Delaware police without any meaningful restraint on what they do with it?

Simple:  we'd still have segregation, because it wasn't too damn popular with the police of those days.

What's not popular with the police today?

Answer that for yourself while you are looking for those license plate reader units that the State Police refuses to admit exist.

Your hard work is very much appreciated Steve.

I wish we had a newspaper that would do their job.

Your work is very good and I appreciate you and hopping for some more informative posts. Thank you for sharing great information to us.customlicenseplates.info