Protected speech? Not according to the FBI ... 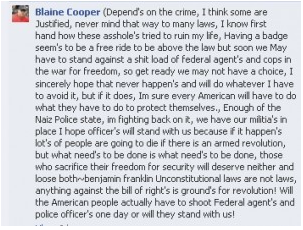 Cooper posted this on either August 21 or 22, 2013, and on August 23 the local police department contacted him and told him to come downtown:  the FBI wanted speak with him.

Here's how Cooper characterized the interview:

He complied with the request for an interview, which lasted 45 minutes with federal agents present.  He was released after apparently being determined to not be a threat.

“They had every Facebook post I had ever made in a huge file, along with all my wife’s information, and parent’s information,” Cooper told policestateusa.com.

Cooper said that he was told that without “defusing the situation” by complying with the interview, his house might have been raided.

“The FBI made mention they came to question me so they didn’t have to kick in my door,” Cooper toldpolicestateusa.com.

The question here is not whether anyone agrees with Cooper's viewpoint or endorses his rant (I'm not endorsing them), but whether his comment on Facebook constitutes protected political speech under the First Amendment. In the post, from what I can see, Mr. Cooper makes no threat against any individual, and his comments about "fighting back" against the "Nazi police state" remain hypothetical and hyperbolic throughout.

Under what provision of law does a Federal agency get to haul a person in and question them based on a survivalist rant that's actually quite similar to what you can find on sale as fiction at any Barnes & Nobles?

I suppose someone could argue that the FBI had other pieces of information about Mr. Cooper, and that this was just one small piece of the puzzle, but it seems highly unlikely--they let him go.

I'm sure I will be visited here by people who don't get the point of this post, which is not to endorse armed resistance, but to raise the point that what's happening to Blaine Cooper is virtually the same thing that is happening to aggressively non-violent environmentalists who are being surveilled and characterized by the FBI as potential terrorists.

Do any of you wonder if, in protesting the Delaware City refinery, or fighting against recent gun control measures in the General Assembly, you have somehow been added to a list of suspects and potential terrorists by a government that increasingly works on us rather than for us?
Posted by Steven H. Newton at 11:46 PM

"Do any of you wonder if, in protesting the Delaware City refinery, or fighting against recent gun control measures in the General Assembly, you have somehow been added to a list of suspects and potential terrorists by a government that increasingly works on us rather than for us?"

You Ain't Done Nothing If You Ain't Been Called A Red...

and nothing ever changes except the labels.

Probably using your blog comments to point out the troublemakers.

I wouldn't be surprised to be on any number of lists. I don't travel by plane anymore so I can't say that I have been put on a no-fly list, but no one else in my family has had any problems. Still, I expect that my activism for these many concepts would, more likely, get me shot by someone who doesn't like my positions or politics. At events, I try to make it a point to talk to any police present. I thank them for their service and tell them that I am the person who will work with them if things look to go violent. For the most part, when you talk to people, it's harder to objectify them to a single concept or characterization. Most police get their backs up if they don't know what to expect. They're people too and want to keep things calm.

I've been called a rabble-rouser and I like that people care and feel emotion for what's important. as citizens we must participate in our communities. Regular demonstrations and rallies tend to diffuse the fear of them, show that the public is reasonable and responsible and are willing to work together.

Corporate manipulation to build fear gets in the way. The refinery rally is an example of that. The lies and security intimidation creates an environment of us/them and brings emotions to base levels. A corporation exists and operates at the pleasure of the population of the state it operates in. Management often gets confused that things are the other way around. When people dispense with their fears, they will get their freedoms and liberty back.