I remember Dubya's Axis of Evil speech back in January 2002.

If I recall correctly, speechwriter David Frum originally wanted an Axis of Hatred.

Anyway, the original Axis of Evil included Iraq, Iran, and North Korea, with Syria, Libya, and Cuba later coming in for an honorable mention as being "beyond the Axis of Evil."

Iraq, of course, has disappeared from the political radar after a quick military victory and a long, bloody, and basically fruitless occupation that Barack Obama ended with as much panache as Gorbachev employed in scampering out of Afghanistan.

[Brief aside:  you gotta wonder which American general will be selected for the Boris Gromov moment of our inevitable withdrawal, probably a few weeks after the Obama Presidential Library opens in Chicago.]

Now, once again, we are being treated to the full Presidential arm-twisting in favor of a resolution (which, like Dubya, he states over and over again that he doesn't really need) that gives him carte blanche to do pretty much whatever the hell he likes in Syria.

And, of course, it won't stop at Syria.  These days the US is not the country that watches the dominoes fall--we're the one who knocks them over.  Iran, North Korea, Yemen, drumbeat, drumbeat ...

Let's be quite clear:  this action is NOT about the moral or national security imperative to somehow stop or punish the use of chemical weapons.  The record of the United States is quite clear with respect to that:  when push comes to shove our leaders really don't give a crap.  Want proof?  Keep reading below the fold.


We supported Saddam Hussein in the use of chemical weapons in his war against Iran in the 1980s, and later--after Desert Storm--we stood by watching and DOING NOTHING while he did the same  to Shi'a and Kurdish citizens of his own country.

We knew that--alongside other barbarities--that the Soviet Union employed chemical weapons in Afghanistan in the 1970s and 1980s--and we did nothing more than keep some athletes home from the Olympics.

There were also reports that Russia tested chemical weapons on Chechnyan school children in the late 1990s--to a resounding silence from American officials when the story broke in 2006.

Ironically, of all the Presidents in all the history of the office, it was Richard Nixon who set the United States on the road to reducing and then eliminating our research and stocks of chemical and biological weapons, although it would take until 1997 before Bill Clinton formally renounced the American use of chemical weapons.

Over the past decade there have been repeated allegations and rumors that the US and UK were partnering in new experiments with chemical and/or biological weapons, ostensibly getting around the international ban on chemical weapons by researching only "non-lethal" weapons.  The US, of course, has denied this (when the government has responded at all to such questions), exactly as the US government denied that it was spying on American citizens.

Here's an interesting (but already out-of-date given the vote in the UK Parliament) chart of the major nations of the world who support and oppose military intervention in Syria, courtesy of Al Jazeera: 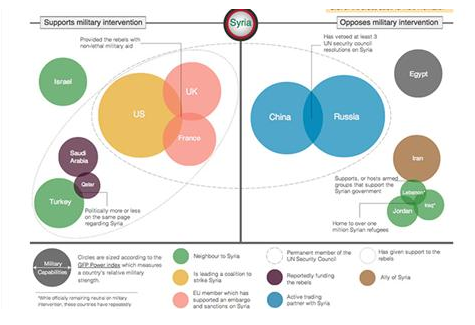 Ah, you know what this actually looks like?  Wow, looks a lot like the Cold War back in the day, doesn't it?

Hearken back with me for a moment to 1991 and Desert Storm, when there were actually Syrian and Egyptian forces in the Coalition, and Bush '41 was looking optimistically toward a "New World Order" as the Russians and Chinese stood back and let us put Saddam Hussein back into his box.

What happened?  You could write books on it (a lot of people do; I'm not sure they make a lot of money on it, because most of the books are dated by the time they are published), but in essence it is pretty simple:

1.  Even during the Clinton administration, which saw the only actual declines in military spending in the past five decades, the US military was cast in the role of world policeman and chief arms exporter [don't praise Bill too highly for defense cuts--he funneled most of the money he saved there into black and gray State Department contracts for private military contractors--mercenaries--and left us a legacy of Blackwater and Xe].

2.  9/11 was a Godsend for the military-industrial complex of the United States.  No, I'm not a truther by any means, but you really need to go back and read the pathetic attempts of American militarists to drum up a reputable opponent during the mid- to late 1990s when virtually everyone in Washington was convinced that the so-called Revolution in Military Affairs would make us militarily invincible for the foreseeable future.  9/11 switched us back to the track of asymmetrical warfare and re-invigorated the National Security State that President Truman so successfully launched way back in 1948.

3.  This was all absolutely necessary because declines in military spending could not be tolerated, and the Bush-Obama years have seen the greatest boom in war production and war spending since World War Two.  If you factor in the domestic spending on so-called "homeland security" and the militarization of our police forces, Dubya and Barack have led us cheerfully into a Brave New World wherein we are less and less able to deal with our economy or our real social needs (regardless of your partisan perspective) because we have to keep sinking money into the military.

4.  The primary lesson of the Cold War:  you will not be allowed to keep a big military on hand unless you use it--a lot.  Korea, Dominican Republic, Vietnam, Laos, Cambodia, Grenada, Lebanon, Panama, Iraq, Haiti, the Sudan, Somalia, Afghanistan, Pakistan, Iraq (again), Yemen, Bosnia, Serbia, Sierra Leone (yes, we sent a carrier group there about fifteen years ago), Somalia (again), multiple African nations; Syria--we've been running missions into Syria for a long time--maybe you've forgotten this from 2008:

A U.S. military official said the raid by special forces targeted the foreign fighter network that travels through Syria into Iraq. The Americans have been unable to shut the network down in the area because Syria was out of the military's reach.

"We are taking matters into our own hands," the official told The Associated Press on condition of anonymity because of the political sensitivity of cross-border raids.

I left out from the list above all of the other operations in which we gave clandestine or mercenary support to one side or the other, like Guatemala, Nicaragua, El Salvador, Chile, Iran (cyberwar!), and oh so many more (like Afghanistan under Soviet occupation where we helped train future Al Qaeda warriors).

Forget all the crap you will hear about deterrence:  we do not and never have bought all those weapons not to use them.

Here's the thing:  we are constantly told that the purpose of our military and our foreign policy is to secure a more peaceful, safer world (or at least a world in which US interests continue to reign supreme).  Barack Obama's rhetoric in that regard could come from Dubya, from Uncle Ronnie, or from Tricky Dick.  We have to use drones and kills lots of people in order to make ourselves safer.

It is the strategy we have been pursuing for well over six decades.

So let me ask you:  Do you feel safer than when Dubya or Barack came into office?

Of course you don't.  And here is the Joseph Heller Catch-22 insanity of all the war drums over Syria, over Iran, over North Korea, over the fact that cutting even one damn bullet from the so-called Defense Budget will lead to a Red Dawn scenario ....

Instead, our leaders (both Democrat and Republican) cite our continuing fears (that they have helped gin up to get elected) as evidence that their strategies and policies are working, and that WE NEED TO KEEP DOING MORE OF THE SAME.

Somebody (like all of us) needs to revisit George Santayana.
Posted by Steven H. Newton at 9:49 PM

Then you're going to keep getting more of the same deceptions. Because War is Always by Deception

And you've demonstrated that you're willing to tolerate lies, so all they have to do to increase defense spending again is "make it happen on purpose" or "let it happen on purpose." It doesn't really matter which. And then, for all your analysis, you're back in the same Rovean "We are the actors of history, we'll leave you to study it as we move on to our next conquest." position as before. So you understand, in retrospect, some of what's going on. That's great. But you'll always be looking backward at whatever is next if you refuse to look at and study the existence and use of joint operations and false flags like 911 to create wars.