Some Unsung Heroes of the Massachusetts Miracle

Here's a little honor roll of just the House Democrats who have ruled and continue ruling the Democrat roost on the Hill....and appear poised to rule it right back into political oblivion.

The Message of Massachusetts : A crisis is a terrible thing to exploit. 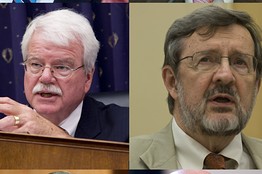 • Ed Markey of Massachusetts, first elected in 1976, helped to ram the cap-and-tax bill through the House and has pushed relentlessly for the EPA to declare carbon a pollutant under the Clean Air Act that didn't mention carbon.

• Wisconsin's David Obey, elected in 1969, is the House Appropriations chairman who steered the $787 billion stimulus to focus on Medicaid expansion and other transfer payments that have done nothing for economic growth.

• Henry Waxman, first elected in the Watergate class of 1974, deposed John Dingell in 2008 as too moderate to run the Energy and Commerce Committee. The Hollywood liberal is co-author of the cap-and-tax vote that will cost numerous Blue Dogs their seats. 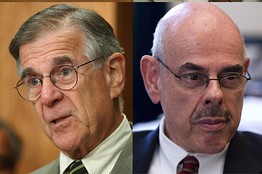 • Pete Stark, class of 1972, runs the health subcommittee on Ways and Means and has written most of the House health reform that has forced moderates to walk the plank on the "public option."

• George Miller, class of 1974 and chief enforcer for Speaker Nancy Pelosi, has pushed to nationalize the college student loan market. Like Mr. Stark, he's from California.

• Barney Frank of Massachusetts, class of 1980 and chief protector of Fannie Mae, wrote the financial reform that would make too-big-to-fail the law for the largest banks. He has also pushed the mortgage foreclosure programs that have extended the housing recession by preventing home prices from finding a bottom. 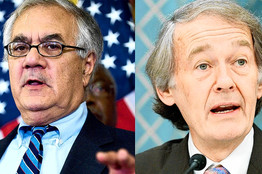 It is the combination of all of these and other policies that has ignited the political revolt we are now seeing in Massachusetts, and first saw last November in Virginia and New Jersey. Had Democrats modified their agenda to nurture a fragile economy and financial system, they could now claim their policies worked and build on them later.

It's striking how most of these entrenched liberal Democrat Congressional lifers have been at this power game for as long or longer than many of us have been alive (and I'm pushing 40).

It's bad enough these people have been getting it wrong for 30-40 years, now they are getting so old they likely won't even be around to see the wreckage their ideology will visit on the country if brought even close to fruition.

Time to hang it up, fellas. Give the country a break and let the next generation of leadership throw the last shovels-full of dirt on your misguided, ever-failing Quixotic quest to socialize America.

Fifty eight percent of respondents favor smaller government with fewer services while 38 percent prefer a larger government and more services, according to the poll.

The small government preference has climbed 4 points since the last time our pollsters asked the question in June and 5 points from almost the same time a year ago.

But by all means, Democrat statists, keep swimming upstream, endlessly scheming to fleece the people into muddling socialized mediocrity and dependency.

Your electoral fate awaits you. Hopefully sooner than you think.
Posted by Tyler Nixon at 9:20 AM

If Republicans had half a brain they'd run somebody who was a fiscal hawk and socially had a live and let live platform they'd win every seat up and down the ticket. Fortunately for Democrats, they're not smart.

"A crisis is a terrible thing to exploit." Theyain't seen nothin' yet: Of Mortgage Brokers, ARMs, Attrition and Marathons. Btw: I have just added a Reference List to my economics blog with economic data series, history, bibliographies etc. for students & researchers.

very well.i want to inform if any one want