Yes, we are a violent nation

Two interesting posts regarding guns and violence today at Delawareliberal (one by pandora, one by cassandra) prompt this post in response, because I think that both of them highlight a similar issue, yet do not come to grips with it in historical context.

pandora argues that we have to start from the position of remembering twenty young lives snuffed out:

My heart is breaking.  And all I can think is This Has Got To Stop.  What The Hell Is Wrong With Us?  Because this is bigger than Adam Lanza and Jared Loughner and James Holmes.  This is about how we’ve come to accept these events; how we almost take them in stride, because, you know… Freedom.

pandora focuses on what she sees as a new, different breed of gun owner:


Most of the gun owners I know are responsible, and most are not defined by their guns.  But there’s a new breed of gun owner out there – a breed that wallows in tactical lingo and lives in a fantasy world where they’re the last defense against the loss of freedom.  Let’s just start saying it:  They are a paranoid group who shouldn’t own guns.

cassandra focuses on the tendency to associate such massacres as Newtown with mental illness, but rightly points out that mental illness cannot alone describe (or, perhaps, explain) the comparative extreme levels of violence in American society:


But focusing on mental health as the symptom, we get to gloss over the fact that we won’t be eliminating dangerous people — if anything, because a fair number of them are quite sane. 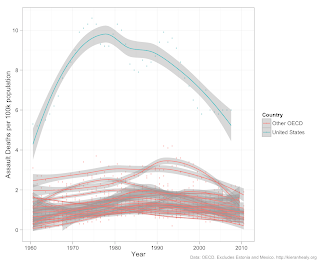 This graph clearly shows how violent a place the United States is. (From the blog’s discussion of this graph: The following figures are from the OECD for deaths due to assault per 100,000 population from 1960 to the present. As before, the most striking features of the data are (1) how much more violent the U.S. is than other OECD countries (except possibly Estonia and Mexico, not shown here), and (2) the degree of change—and recently, decline—there has been in the U.S. time series considered by itself.) This time series documents deaths by assaults of all kinds, not just guns, but this should break the heart of every citizen. How can this be us? And while these deaths are on a decline, we are still a clear outlier — we are still subject to an entire industry fronted by their political arm hellbent on scaring us in to the false security of guns that will save us from the ever growing hordes. But go back and look at that graph. That isn’t a story of mental illness.

Pointing out (accurately) that even massacres don't force us into national discussions about guns, violence (or even mental illness), cassandra ends with the same notion that pandora emphasizes:


Yet massacre after massacre, death after death, our response is the same. Nothing. Or I should say, the usual handwringing, the usual political suspects trying to make it difficult to discuss the danger that guns (or certain ones of them) present to all of us, and the idiotic “Guns don’t kill people, people kill people.”

Let's start with a couple of observations about the graph that cassandra uses:

1.  It is difficult to link this trend with any political ideology or party being in control of the government or the country.  The line rockets up during the administrations of JFK (D), LBJ (D), Nixon (R), and Ford (R) to peak with Carter (D).  Then the line begins a steady decline through Reagan (R), Bush (R), Clinton (D), Bush (II) (R), and Obama (D).

2.  It is likewise difficult to link this trend with specific events.  Sure, you could argue that the 1960s were tumultuous, full of civil rights, Black Power, war protests, and riots--but the 1970s that followed were arguably FAR more violent than the 1960s had been.  And what events could you cite to see the violence peak and start to descend (every so slightly) during the Carter administration.  It also points out that--at least at this scale--the Federal Assault Weapons ban (1994-2004) seems not to have impacted anything.  Violence was on the decline before, during, and after that law was in force.

These two observations suggest (in language that cassandra and pandora both like to use on occasion) that violence in America is "not a bug, but a feature."

(A footnote:  contrarian economist Steven Leavitt would argue that there is one historical event you can statistically associate with this decline--Roe v Wade and the free availability of abortion since 1973.  The argument is worth examining, but be careful not to make the infamous Bill Bennett mistake.)

Hey, let's own that:  we are, and always have been, a violent society.  Historian Geoffrey Perret calls the US "A Country Made by War."  Forget our citizenry (deranged or otherwise) for a moment:  The problem with the call that "This. Has. To. Stop." is that much of the underlying culture of violence has been perpetuated by the government--especially for the past forty years--and that asking for solutions from the government when violence is the problem is, well, problematic.

We are killing other people's kids around the world every day in Pakistan, in Yemen, in Honduras.  There's an important if unlovely and uncomfortable point to be reinforced here:  dead Pakistani school children at the hands of US drones no less constitute young lives pointlessly snuffed out, with grieving parents who have emptiness in their souls than the children who will never come back to their bedrooms in Connecticut.

We are the world's largest exporter of weapons.  We spend more on weapons for our "defense" than the rest of the world combined.  That, "They are coming to get us" mentality within the US is exactly the mentality that politicians of all parties use with reference to the rest of the world, so why should you be surprised to see it echoed internally.  It's fractal, I think.

Violence in America is in part so prevalent because, despite our mantra of freedom, the power of the State is as pre-conditioned to the use of violence as those paranoid nuts that pandora believes should not own guns.    And while the far-gone tactical gun nuts pandora discusses are out there (but I don't honestly know in what numbers), there are also folks like DelDem who just characterized everybody who disagreed with him as an "enemy of the United States" [in comment that he has now unceremoniously removed from the thread over there], or the people (including many, many on the left) who demonized Tipper Gore over music lyrics, or the liberals who only come out when there is a school shooting of white school children and haven't been pushing the issue as gang violence related deaths in our cities have started to climb back up at an alarming rate since 2006.

I don't see those folks examining their investment portfolios to divest themselves of the gun manufacturers who also happen to be defense contractors, and whose profits are underwriting their retirement funds.

There is a naive assumption that if we ban "assault" weapons, limit magazines, pass stringent laws on mentally ill people being near guns, tax ammunition, outlaw certain kinds of ammunition, install waiting periods and close gun show loopholes that it will actually address the underlying, society-wide condoning of violence.  I don't think it will.

The counter argument is, of course, that those things won't solve the overall problem but will at least make things relatively safer while we move toward the right end.

Except that there is never a serious acknowledgement that we have to do something about the State as a main purveyor of violence because, you know, we are the State to a large extent these days.  Police officers have killed 531 American citizens so far this year (we've still got two weeks to go), including mistaken and/or completely unnecessary shootings.

We don't even know how to count how many civilian bystanders we've killed around the world in the past year, in part because our government either claims not to keep count, or that the total is a matter of national security.  Take your pick.

The difficulty is this:  we will not mediate or end America's social culture toward less violence unless and until that is tied to mediating and/or ending violence on the part of our government.  And that doesn't just mean paying lip service, "Oh, I'm against state-sponsored violence as well"  It means linking the two--a genuine discussion about how to reduce gun violence in the US with an equally genuine discussion about how to scale back the warfare/police state we've been growing on steroids for the past decade.

"we will not mediate or end America's social culture toward less violence unless and until that is tied to mediating and/or ending violence on the part of our government. And that doesn't just mean paying lip service, "Oh, I'm against state-sponsored violence as well" It means linking the two--a genuine discussion about how to reduce gun violence in the US with an equally genuine discussion about how to scale back the warfare/police state we've been growing on steroids for the past decade."

100% agree, and I see the event in Newtown as a way to open this discussion.

It takes a lot to shock us. Consider us now shocked. We are discussing guns and our relationship with them, as well as what the hell is wrong with us. It is time to expand that issue to our war loving ways.

But that's going to be tricky... and you know that. Hell, up until 20 children were gunned down talking about guns were a no no.

"You know, we had this discussion about creating gun threads the other day, and there you go.

I’m going to sit back and let you re-learn this lesson."

You, of course, were correct. Gun posts always turned into a mess. And why was that?

But maybe... just maybe... this time we've caught everyone's attention. Maybe we can build on the outrage and open numerous debates. It's past time we've had them.