Let's talk about getting out of poverty . . . and why it doesn't happen in Wilmington

We live in a state that likes to think good things about itself--sometimes our biggest obstacle to solving problems is our adamant refusal to admit they exist.

Delaware in general (and Wilmington in specific) is a very bad place to be poor, because your chances of upward mobility are considerably worse than the national averages.

First, take a look at this map from Equality of Opportunity.org: 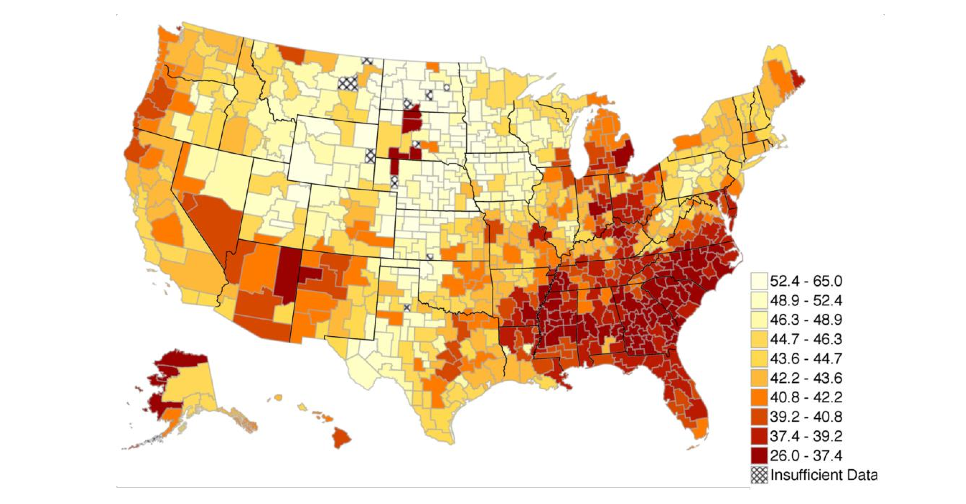 You should visit the link for a larger view of the county-by-county map if you want nuances, but even a quick glance at Delaware will tell you what the statistics show:  in terms of the ability of children born into poverty escaping poverty, Delaware ranks with North Carolina, South Carolina, Georgia, Alabama, and Mississippi [the darker the red, the worse the chances].

As for Wilmington proper, Equality of Opportunity divided the country up into 709 Commuting Zones (counties that shared a common economic center) and then rated the chances of a child growing up in the bottom fifth managing to reach the top fifth within that zone.  Some of the percentages are quite amazing, and others are predictable once you think about it.  Commuting Zones based on smaller, more rural areas tend to have more economic mobility, partly because there is less of a difference between the top and bottom fifth than elsewhere (which is why, I suspect, that North Dakota is apparently the very best state in the nation for moving out of poverty). [Note:  in the trivia mode, I learned that there is a "Virginia Beach, Nebraska"--never knew that.]

. . . and Wilmington DE (6.6%).  According to my count (and I could be off by one or two places as they did not number the columns, the Wilmington DE Commuter Zone placed 526th out of 709 CZs in the entire nation.  This places us in the company of Chicago IL, Baltimore MD, Kalamazoo MI, and Muskogee OK.

Equality of Opportunity cites five major factors that correlate with the ability to escape from poverty (I'm citing from the Executive Summary for ease of quotation, but I've worked through the entire paper, which is here.)

First, let's talk about what factors do NOT appear to have a correlation to escaping poverty:


So what do they find?

We begin by showing that upward income mobility is significantly lower in areas with larger African-American populations. However, white individuals in areas with large African- American populations also have lower rates of upward mobility, implying that racial shares matter at the community (rather than individual) level. One mechanism for such a community-level effect of race is segregation. Areas with larger black populations tend to be more segregated by income and race, which could affect both white and black low-income individuals adversely. Indeed, we find a strong negative correlation between standard measures of racial and income segregation and upward mobility.


CZs with larger Gini coefficients have less upward mobility, consistent with the “Great Gatsby curve” documented across countries (Krueger 2012, Corak 2013). In contrast, top 1% income shares are not highly correlated with intergenerational mobility both across CZs within the U.S. and across countries. Although one cannot draw definitive conclusions from such correlations, they suggest that the factors that erode the middle class hamper intergenerational mobility more than the factors that lead to income growth in the upper tail.


the strength of social networks and community involvement in an area -- are [is] very strongly correlated with mobility. For instance, high upward mobility areas tend to have higher fractions of religious individuals and greater participation in local civic organizations.

There is an awful lot here to digest--almost something for everyone.

It is at this point that you would normally expect a nice, cut-and-dried program of political reform, but it is not time for that yet.  These are national trends, and while we should expect to have them bear some weight on the problem of escaping poverty in Wilmington, we should also be aware that every city, every Commuting Zone if you will, is different, and there are nuances to be examined in the light of the full report and when compared to the data from Wilmington.

So let's bat around causes for awhile before we start jumping on cures.

If you attain a high school diploma, do not get arrested and do not have a child before the age of 20, you have less than a 10% chance of living in poverty in the United States. Sadly, a large majority of the citizens in the city of Wilmington are on the wrong side of those statistics.

A child can overcome a bad neighborhood if he/she has strong parents that can guide the child past the bad influences.

A child can overcome bad parents if he/she lives in a good neighborhood. The child will see how you should live you life.

No child can overcome negligent parents in a drug/crime infested community.

"I'm still having trouble wrapping my head around the fact that it is nearly twice as easy to escape poverty in Washington DC,"

Pretty self explanatory. just bet on the Redskins to lose, and you are upwardly mobile in no time....