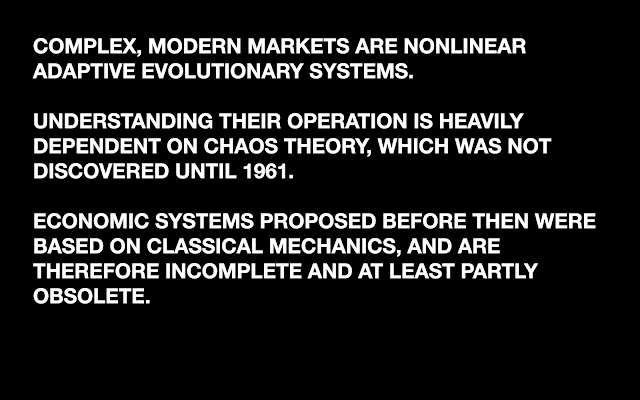 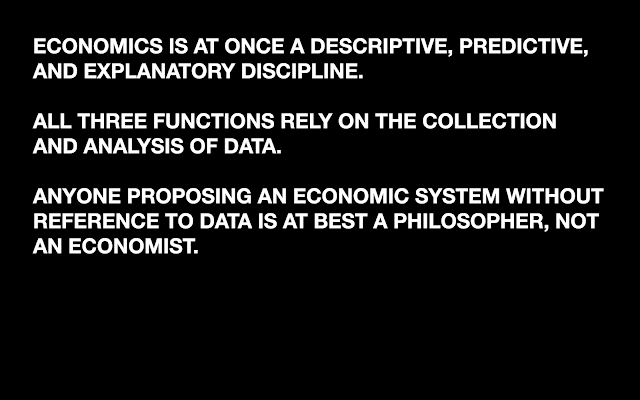 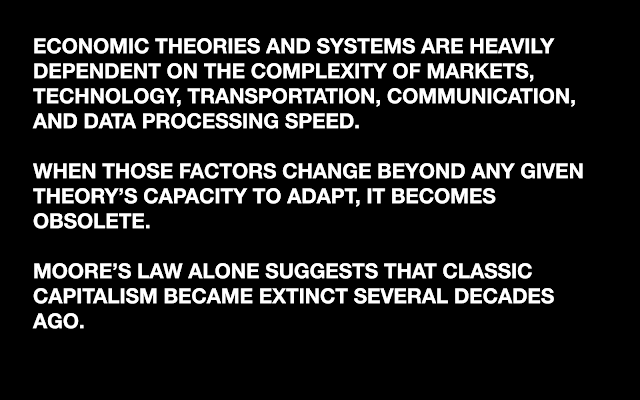 Will McVay said…
I have to take issue with your last one, at least depending on your definition of "capitalism". If we're talking about "free market capitalism", which I will concede has never been fully realized in practice anyway, then your other memes essentially require that to be the ideal economic system because nothing else is capable of the same kind of adaptation as a system that is anathema to systemic coercion. Circumstances, as you say, are always changing and every other form of economic organization serves in some way to entrench established interests beyond what just "economic activity" in the market would otherwise support. I will concede that without "data" I'm making a philosophical statement here rather than an empirical economic one, but it is only "philosophical" in that it is accepting many of your premises and applying logic to them. You single out "capitalism" as being obsolete but your premises are equally if not more damning to every other economic system. They were all first described by dead economists, but chaos theory and Moore's Law and all the other stuff basically amounts to no one really being able to credibly issue prescriptions for how economic activity should be organized even on the scale of a small community due to the number of factors no one could fully account for any the inevitable changing circumstances it would have to adapt to. The advantage of free markets, as conceptualized by libertarians, is that people have no coercive "big bad" to blame for their circumstances outside their own choices in how to adapt to the reality they're presented with and very few restrictions on what they may choose to do to deal with it. There are multiple parallel and divergent and contradictory efforts to adapt rather than one large effort possibly in the wrong direction. Every other system involves coercive efforts at coordination based on imperfect or even incorrect information that may change without warning and beyond that system's ability to adapt.
April 7, 2021 at 12:05 PM

Glen Maxy said…
Our Constitutional Law Assignment Help has a team of experts who have years of experience and skill in curating top-notch quality constitutional law assignments within a short period of time. We make sure to do in-depth research along with gathering relevant information from reliable sources and then compose the final content for our clients in the USA.

Glen Maxy said…
Our Constitutional Law Assignment Help has a team of experts who have years of experience and skill in curating top-notch quality constitutional law assignments within a short period of time. We make sure to do in-depth research along with gathering relevant information from reliable sources and then compose the final content for our clients in the USA.

Logisticguru said…
LogisticsGuru.PVT is available with 24/7 customer support where you can get the actual time status of your vehicle transportation because customer satisfaction is its major priority. LogisticsGuru.PVT is one such platform that deals with commercial as well as individual car shifting services. They are the best when it comes to car relocation from Car TRansport In Delhi. With a network of 70 destinations, they cater to your needs providing top-notch experiences.
June 18, 2021 at 10:42 PM

James Charlie said…
What the blog is missing out on is a superb conclusion, as it would have given it the perfect finishing touch. Now you can make most of the academic writing services at MyAssignmentHelpAU offering University Assignment Help. The services promise to add all elements your paper needs.
June 30, 2021 at 7:51 AM

Jayden Lee said…
Amantel - International Calling APK
Nice Post Amantel Best App For Calling
With Amantel Login & Signup, there are two ways for you to call internationally:
International calls to anyone, anywhere
With our subscriptions, you can connect as much as you want to any cell phone or landline and Mobile phone in more than 70 countries.
Or you can choose the World Credits prepaid payment method and Online Recharge payment to call any country in the world with the lowest possible rates.
Cheap International Calls to India
August 16, 2021 at 2:11 AM

March 31, 2013
In my post about the idiotic over-reaction to a New Jersey 10-year-old posing with his new squirrel rifle , Dana Garrett left me this response: One waits, apparently in vain, for you to post the annual rates of children who either shoot themselves or someone else with a gun. But then you Libertarians are notoriously ambivalent to and silent about data and facts and would rather talk abstract principles and fear monger (like the government will confiscate your guns). It doesn't require any degree of subtlety to see why you are data and fact adverse. The facts indicate we have a crisis with gun violence and accidents in the USA, and Libertarians offer nothing credible to address it. Lives, even the lives of children, get sacrificed to the fetishism of liberty. That's intellectual cowardice. OK, Dana, let's talk facts. According to the Children's Defense Fund , which is itself only querying the CDCP data base, fewer than 10 children/teens were killed per year in Delaw
12 comments
Read more

September 25, 2009
I thought it would be at least amusing to use the Delawareliberal comments as sub-headings regarding each category of what is wrong with the proposed tax on sodas and juice drinks. But there are so many different little strands of each comment that it would be impossible to pull them all out. So, instead, I'm going to let you read them in more or less the order they appeared, and note the assumptions. pandora: I’m perfectly okay with taxing sodas and juice drinks. Mainly because they’re total crap, and one of the main reasons our country’s children are overweight. They are also dirt cheap. Assumptions here: (1) Because "I" am perfectly okay with a new tax it should be imposed on everybody; (2) it is the government's responsibility to keep children from being obese; (3) the cheapness of the product to be taxed justifies charging people more for it. John Manifold: Soda fattens your kids [and you and your husband], shortens their lives, costs more than wate
63 comments
Read more