The revenge of Immanuel Velikovsky... 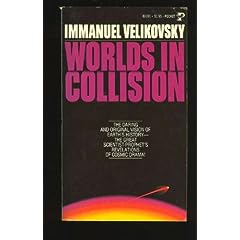 The original great catastrophist who believed that much of the mythology of ancient history could be explained by an exceptionally active solar system in which the Earth was once the satellite of a proto-Saturn, and that the inner planets had experienced repeated close encounters must be smiling somewhere....

... as astronomers have recently used computer simulations to prove that the solar system may not be the staid place it has been portrayed on those wall charts in my elementary classroom:

Our solar system has a potentially violent future. New computer simulations reveal a slight chance that a disruption of planetary orbits could lead to a collision of Earth with Mercury, Mars or Venus in the next few billion years.

Despite its diminutive size, Mercury poses the greatest risk to the solar system's order. Results of the computer model show a roughly 1 percent chance that the elongation of Mercury's orbit will increase to the point where the planet's path around the sun crosses that of Venus. That's when planetary pandemonium would ensue, the researchers find, and Mercury could be ejected from the solar system, or collide with the sun or a neighboring planet, such as Earth.

Yes, it's the far future, and the astronomers indicate that this class of results appeared in less than 1% of their program runs, but...

After the harsh reception to his theories given by the scientific establishment...

You can bet that at Kronia, Aeon, The Velikovskian, and SF author [and libertarian] James P. Hogan will all be celebrating soon.
Posted by Steven H. Newton at 9:44 PM

So many planetary end scenarios await w/ near 100% accuracy. The sun going supernova. The earth's core cooling down, stopping shifts in the earth's crust, causing the planet to cool to a point that it is uninhabitable.

We live on a terminal earth and the history of humanity will be just a blip in time.

The meek shall inherit the Earth (when the rest of us leave for the stars...)

Actually Dana, our sun won't go supernova. It's not massive enough. It'll expand to a red giant eventually, then fizzle out to a white dwarf.

Science, schmeince! According to the Mayan calendar, the universe ends in December of 2012. So don't worry about those trillion dollar budget deficits.