Everybody (including me) likes to keep beating the Markell administration (and the legislature that let it happen) over the head about Fisker.

But by the time that the News Journal gets involved, you have to know that the story is finally old hat.

Instead of pointing the finger at Alan Levine and Jack Markell (neither of whom is running for re-election in 2014), how about we do the responsible thing and stop this team of capitalist geniuses before they help us again.

OK, maybe we can still expect our legislature to stop them before they do it again.

Here's what Governor "Trust me I'm a knowledgeable Wall Street capitalist" Markell and Alan "I made mine, so now it's time to play with your tax dollars" Levine plan for our 2014 State budget.

Remember that revenues are down, hard choices must be made, and we can't afford Minner Reading teachers, School Resource Officers, or to conduct a statewide safety assessment of our schools and public buildings to make them better protected against people who might want to kill children. 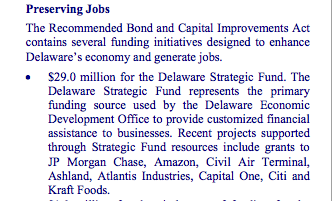 First, notice that the list of "recent projects supported" has been purged of those pesky losers like Fisker and AstraZeneca, where spending millions (including uncollected school taxes) didn't turn out to preserve or create jobs.

Second, let's take a look at our current crop of Delaware welfare queens:

JP Morgan Chase has an annual revenue of $109 billion.  Uh, folks, the State of Delaware has a total income of $3.6 billion, and we're giving them money?

Citigroup has an annual revenue of $97 billion, and we're giving them money while we make schools compete for "safety grants"?

Amazon has an annual revenue of $60 billion, and we're giving them money while we cut reading and math specialists in our schools?

Capital One has an annual revenue of $23 billion, and we can barely afford medical care for prison inmates, but we're giving them money?

Kraft Foods has an annual revenue of $18 billion, and we're giving them money while we cannot afford School Resource Officers?

Ashland has an annual revenue of $8 billion, and we're giving them money while tens of thousands of people in Delaware have no healthcare?

Atlantis Industries has an annual revenue of $3.6 billion, which is the same as the State of Delaware, and we're giving them money while we can't afford environmental clean-ups?

OK that's seven of the companies that Governor Markell is bragging that we have given money, seven companies with a combined total revenue of $318.6 BILLION, as opposed to Delaware's $3.6 Billion (or, think of it this way:  they take in, between them, nearly $100 in revenue for ever $1 Delaware receives of your tax money), and we're giving these corporate welfare queens money?

And we're bragging about it?

Yes, of course we need jobs in this State.

1.  If you really wanted to give away money to help potential employers, just think how many small businesses in Delaware could be supported to hire new workers and expand their enterprises with the $29 million that is literally a rounding error to these mega-corporations?

2.  The reality is that our pitiful few million dollars of grant money do not even constitute effective bribes for companies like JP Morgan Chase or Citigroup.  They take the money out of our coffers to remind us that they can.  They actually base their employment decisions and their location decisions on things like our infrastructure, our public education system, our crime rates, etc. etc.  They cash our tiny (in their terms) little checks and use the money to pay for the appetizers they serve in the boardrooms on "Chump Appreciation Day."

I don't blame Governor Markell or Mr. Levine half as much as I blame our General Assembly.

Anybody can offer you an indecent proposition:  it's your choice to lay down and spread your legs.
Posted by Steven H. Newton at 9:57 AM

All school funding should be raised locally and this doesn't happen.

Actually there should be a corporate tax to pay for education. Look who benefits? Just as drivers on Rt. 1 must pay a toll as a way of not taxing someone not using the product, so should Corporations (lets make it any LLC company) pay a "corporate tax" of invest in their own future human capital... At 5%, as one would a sales tax, these Delaware Corporations would kick in nationally about 16 billion.

That 16 billion should not come from property owners who will get minimal benefit out of their property tax assessments... Fair is fair. If you are going to make $318 billion, you should be happy to keep 95% of it...

Kavips, queen of static analysis, does not fail to disappoint. You cannot assume that revenue would last as the number of firms that are operating on such a thin margin that this would kill them and the bigger players who would find it cheaper to relocate.

Is this a case of the GA being caught in a feedback loop of money for reelection efforts and tax breaks/incentives as a reward?

Most of the time governments are the policy and statutory arms of wealthy elites interests. So what Steve says here is dead on but not surprising. What is surprising is that this truth escapes the recognition and outrage of the general population.

Didnt someone recently do a calculation on the AZ welfare that in the years since all the tax breaks, road construction, etc was done on 202 that the taxes made by AZ locating there havent recouped what was given?

If you have lots of profits, you will pay taxes. You can certainly afford to pay a lot more for better education, from which of course, you would benefit immensely...

I'm surprised you didn't figure that out before posting.