I really should do a coordinated piece on this, but times are full of lots of stuff, and so I offer just a few observations:

You can really tell who owns the General Assembly here.  According to the proposed increases for next year:

DelTech will receive an increase of over $5 million--a 7.8% increase

DSU will receive an increase of about $0.9 million--a 2.8% increase

In other words, in both terms of total money appropriated and percentage increases, despite the most rapidly growing enrollment in the state, DSU will again be the stepchild of higher education in Delaware.

Four years ago the state appropriated about $38 million for DSU; this year's "increase" will bring DSU back up to just  $33.7 million.

From a comparative standpoint, DelTech's 2009 appropriation was about $73 million, and this year it will rake in over $74 million.

Again:  you can tell who really owns the General Assembly here.

The completely unnecessary Office of the Secretary of Homeland Security had a budget appropriation in 2012 of $8.3 million.  In 2013, when almost all other state budgets were shrinking, that appropriation leaped to $12.9 million, and next year they are slated to get $13.5 million.

Now remember, this office is above and out of the budget line of the Delaware State Police.

So what are we getting for our $13.5 million, aside from the privilege of having a hefty-salaried retired FBI bigshot sitting on his ass in Wilmington?

I don't think you'd believe it if I just quoted it, because you probably think the Office of the Secretary of Homeland Security actually has something to do with law enforcement.  The reality is that all it has to do with is ... $13.5 million in paper-shuffling. 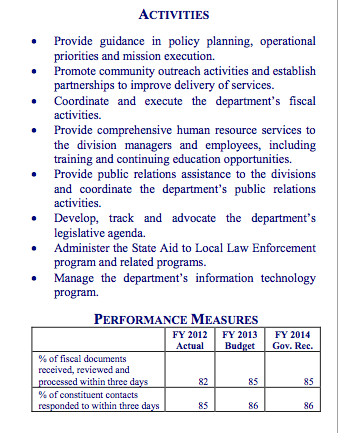 You get this, right?

The performance measure for the Office of the Secretary of Homeland Security is evaluated on "the percentage of fiscal documents received, reviewed and processed within three days."

There's, uh, nothing in the entire freaking document about being evaluated on making Delaware safer, on conducting risk assessments, or anything like that.

Here's a thought:  instead of taking $13.5 million for plush offices and sending a retired FBI agent to conferences so he can pimp for the next FBI Directorship on the state dime, let's actually spend the money on ... homeland security.

Want to know how to make our schools safer?

Eliminate this office and return its oversight functions to the Delaware State Police.

Then take $13.5 million and have an actual safety audit of our public schools done and begin spending the money to upgrade their security.

Let's see:  over five years we would be able to commit over $75 million to improving the safety and security of our public schools without increasing taxes by a dime, and we could get rid of the ridiculous idea that our schools should compete for grants to make their students safer.

Later I'll do public education and a few other topics.  This is enough to chew on today ....
Posted by Steven H. Newton at 11:46 AM

Oh come on Steve. You know how important those Radio Ads I hear every day on WDEL telling me how important it is to rat out anyone doing anything slightly out of the ordinary are. Those ads alone make the Delaware Dept. of HLS worth every penny we spend on them! ;)