The Highmark footprint in Delaware is both deeper and wider than you think ...

I have, of course, been going into great detail to explain the relationship between Highmark and MedExpress, and to lay out what appears to be the Highmark plan for establishing a monopoly on health insurance and even health care in Delaware.

This is apparently worrisome to some of the leaders of Highmark Delaware, who appear to have become new followers of this blog, like President/CEO Timothy Constantine and (this title is not only a mouthful but quite unintentionally revealing) Senior Vice President for Provider Strategy and Integration Paul Kaplan.

It is important right now to step back and take an even broader look at the overall Highmark empire, to include specifically the parts of that empire that impinge on Delaware.

I will warn you at the outset that this is a long, LONG post, but if you actually care about free-market competition, monopolistic business practices, or government corruption, you need to read it all.

What you have to know to begin with is that Highmark (the parent company) is a not-for-profit (no, I'm not kidding) corporation that includes in its holdings a fascinating mix of both non-profit and for-profit subsidiaries.  Time to read below the fold if you truly want to be informed:


For example, Highmark controls (at least) the following not-for-profit entities:


But to those we must add this (possibly incomplete) list of Highmark's for-profit holdings:

By the way, as I was doing the final editing on this piece I discovered that I was wrong.  Highmark actually owns AT LEAST 35 subsidiary (and mostly for-profit) companies.

Within Delaware, then, we need to note that Highmark controls the following:

If you want to get a real glimpse of how Highmark reports its own strategy, you really have to look now further than Visionworks, which is now the largest American-owned chain of optometry stores, and second in size only to foreign-owned Lens Crafters.

First, here's the story of the great Visionworks consolidation:

Visionworks is the name that eventually will be taken by all 600 or so of the retail vision outlets that Highmark operates across the . It's also the name of the Texas-based corporate entity that operates the retail units (the company used to be called the  Inc.).

By November, each of the separate 15 brands (EyeMasters, Binyon's, Hour Eyes, Dr. Bizer's VisionWorld and many more) that were acquired over the years by Eye Care Centers of America will have been rebranded, said Jim Eisen, president of Visionworks.
It was a long process, but "in order to really grow into a national brand, you obviously have to have one name," Mr. Eisen said. "We are going to continue to grow stores and open stores."

Plans are to open 36 or so Visionworks locations this year, and 70 to 90 more in 2014 and beyond. Eventually, Highmark's Visionworks will have a retail vision presence in 46 or 47 states, Mr. Eisen said.

It is critical to know that Highmark brags publicly about seeking full vertical integration (read "monopoly") over the entire vision industry:


By "fully integrated," Highmark means that its  vision wing, Highmark Vision Holding Company Inc., controls all components of the eye business -- from the  company, Davis Vision Inc., to the retail clinics, down to the optical manufacturing centers.

This year, the company is opening a new lens and frame manufacturing center in , its fifth manufacturing and distribution hub in the U.S.

"We're creating a product, end to end, from manufacturing all the way to the retail sale," said William Winkenwerder Jr., Highmark's CEO.

Now, remembering that Highmark owns both Visionworks and Davis Vision Insurance, here's how Highmark uses that vertical integration to drive its local competitors under:


The spread of Visionworks into the Philadelphia area has long worried local independent opticians, who say they already operate at a competitive disadvantage because of rules they must follow to be in the Davis Vision network.

Davis Vision, which is also owned by Highmark, is the region’s largest vision benefit management company. Davis Vision also operates an eyeglass manufacturing plant in Newtown Square, and requires independent opticians to use that plant when ordering eyeglasses for Davis Vision members.

One area optician, who asked his name not be used, said the addition of the Visionworks stores will create an even more uneven playing field for the independents. He said when dealing with Davis Vision members, who make up about 60 percent of his business, he will still be required to place orders for glasses to be made at the Newtown Square plant — a process that takes days to get finished product to his customers. Visionworks, he said, promotes its ability to provide one-hour service on most prescriptions by using on-site processing laboratories.

Are you getting this?  It is exactly what I have been telling you about the Highmark-MedExpress relationship:  Highmark as the insurer (Davis Vision) provides preferential services to its own subsidiary (Visionworks) that are denied to independent local opticians.

Let's go further and ask about United Concordia, Highmark's for-profit dental insurance company.  United Concordia recently lost its Tricare (US Armed Services personnel and their dependents) contract that it had held for fifteen years.  There are two takeaways here.

1.  It's pretty apparent that many military members and their families were more than ready to see United Concordia go.  Consider some of the following (representative) complaints you can find without looking very hard at all:

i have had to submmit claims over and over again, because UC keeps denying my coverage. i paid $1000 out of pocket in my last treatment and UC was nice enough to reinburse me $168, they are a rip off. "military friendly" i think not!

2.  In the story on Highmark's United Concordia losing the Tricare contract we find some other not well known details about the corporation's gigantic reach:

Government work is an important part of Highmark's . In addition to the Department of Defense contract, Highmark also has a  processing deal and holds a variety of state contracts.

It turns out that Highmark had to sell off Highmark Medicare Services in order to acquire Alleghany Health Systems because government regulators thought owning the two companies simultaneously might constitute a conflict of interest:

Sold off?  Sounds good until you read the rest of the article:


Highmark is already the Medicare administrative contractor for Pennsylvania, New Jersey, Maryland, Delaware and the District of Columbia.

Although Highmark is best known as a commercial insurer, much of its annual revenue comes from its side businesses, which include servicing contracts and administering policies for the federal government.

It also saw $660 million in direct-business premium revenue processing benefits for federal employees and families of soldiers, and it reported $1.5 billion in other Medicare-related revenue.

Highmark Medicare Services serves about 4 million Medicare beneficiaries but does not include those in Medicare Advantage or Highmark supplemental plans.

What does Highmark ultimately plan to do?  If it isn't obvious at this point I will let their own spokesman spell out for you the grand strategy for completely controlling the medical industry from insurance to real estate to provider:


"West Penn [Alleghany] is only a small part of our strategy going forward," David O'Brien, executive vice president of Highmark, saying the insurer is in active discussions with physicians, hospitals and other providers "to expand our footprint in the provider world."

And here are my two favorite quotations from this story, first with Highmark saying they want to control everything without driving independents out of business:


That does not necessarily mean that Highmark is trying to purchase physician practices, he said. "We hope that a lot of providers will stay independent."

Then with University of Pittsburgh Medical Centers pointing out that Highmark's business practices make this so much hooey:

"Highmark's acknowledged lack of impartiality processing Medicare claims are exactly the same conflict of interest concerns UPMC has with Highmark if there were a commercial health insurance contract once the current one expires, the West Penn Allegheny acquisition is finalized and Highmark completes its grand vision of building a new provider system."

So when Highmark came to Delaware (because, ironically, both Highmark and MedExpress got shut out of the Philadelphia market when the bid to acquire Independence Blue Cross Blue Shield fell apart),    Insurance Commissioner Karen Weldin Stewart not only backed a $175 million tax break for the "new" BCBS company (which, ironically, has most of the same officers it used to have--the Delaware Way), and then gave her reason for doing so:


“I have watched with great concern as Blue Cross Blue Shield of Delaware and other small health insurers have struggled to compete with large national insurers who have billions of dollars of capital and resources,” Stewart said. “These small companies have limited ability to make the changes required by today’s health care reform.”

In other words, KWS brought Highmark to Delaware because it had the potential to be a monopoly.

Not for KWS and Delaware the rough-and-tumble of a competitive market.  Nope.  We wanted to bring in the largest possible gorilla with a track record of running roughshod over any possible competition.  Why?  Because KWS actually thinks that creating monopolies makes prices to consumers go down?  Yep.  Sure.

But remember, please, that the top leadership of BCBS Delaware did not change when Highmark came to town.  Receiving that $175 million write-off as a sweetener, Highmark kept President Tim Constantine around--you know, the local guy.

Yep, the local guy, who is not only a big Markell contributor, but contributes freely to GOPers and Dems alike as along as they don't look too closely at Highmark's emerging Delaware monopoly.  Here's the list of ways Tim Constantine has used his name that appear on the Commissioner of Elections Finance web page so that you can delve for yourself to find out what he's dropped personally in Delaware elections recently: 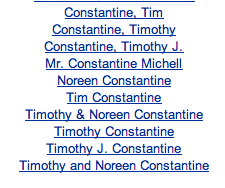 Forget Mr. Constantine Michell, who appears to be a different person, and just take a gander of of the Constantine household's campaign giving.  I haven't yet tracked PACs associated with Highmark, but trust me, I'll get around to it.

(Oh, and for fun, you will also find Paul Kaplan's name there.  Wonder why a Highmark bigwig would have been supporting Dr. Michael Katz in his Senate campaign in 2012?)

The complete irony here is that most of my liberal friends are always talking about how the "for-profit" insurance companies have ruined health care in America.

They are a non-profit.  They're the good guys, right?

And they are slowly digesting the tiny state of Delaware because, after all, they've paid for it.

Or put it this way:  KWS and the General Assembly hocked the State of Delaware health care system to a non-profit corporation that took in revenues equal to more than four times the ENTIRE state revenues of Delaware.

Oh, and that non-profit corporation reported a PROFIT of over $444 million.

Tell me again exactly how this profit/non-profit thing works.

Keep sharing interesting stories about it. We are looking forward to see more about it soon. Have a nice day.