In case you missed it, Mao-loving Obama WH uppity-up Anita Dunn has been tossed overboard, err...she wants "to spend more time with her teenage son."


Reason's Tim Cavanaugh sends it up :

Jake Tapper reports that Anita Dunn, tongue-chewing White House communications director, acolyte of Mao Zedong and Mother Theresa, and a frequent surprise guest in the Hit & Run comment threads, has been ousted by counterrevolutionary enemies of the people.

Tapper, a running dog of the American Imperialist Broadcasting Company, says that Dunn was not made a non-person by capitalist stooges, but rather is leaving voluntarily. 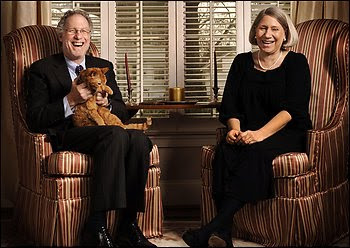 Dunn Pictured With Her Husband, Holding Their Cat "Chairman Meow"*

And I wouldn't cry too much for Ms. Dunn, as her husband is a front-runner for WH Counsel...so she'll probably keep her Oval Office pass.

Remember the Cold War, when the analysts would try to read the Soviets by which party hacks were sitting with Brezhnev watching the missiles roll by?