It is very difficult these days to find references to Vision 2012, the original title of the Rodel-led initiative to transform Delaware schools.

Paul Herdman et al have, for example, written it out of the history of Vision 2015 published by the Harvard Graduate School, just as Herdman had Delaware's first State Secretary of Education, Iris Metts, edited out of the same article.

The term "Vision 2012" has also been pretty carefully scrubbed from its website.  Google searches may turn up references to the older name, but when you try to follow them, this is what you get: 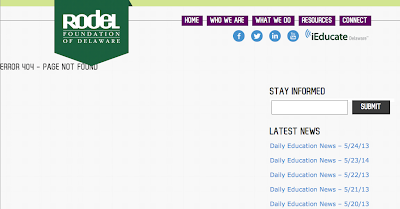 You can still find scattered references to Vision 2012 if you look real hard, like this one in Delaware Today from (ironically) 2012:

Vision 2015 (originally titled Vision 2012) focuses on six major system reforms, four of which were also building blocks of the state’s Race to the Top plan. So far, 25 schools are part of the Vision Network that is putting Rodel-backed reforms into practice.

The most specific reference to the original Vision 2012 that you can now find (outside of Delaware blogs) with even a determined web search is this article from the October 2005 edition of Philanthropy Magazine:


To that end, the Rodel Foundation of Delaware’s mission is clear: to help Delaware create one of the finest public school systems in the nation by 2012.
The Foundation’s eight-member volunteer board meets quarterly and works to ensure that Rodel spends its funds appropriately on what it calls “Vision 2012.” Rather than supplying conventional grants or scholarships, the Foundation is committed to investing in systemic reform of the public school system, and it seeks to engage parents, teachers, administrators, business leaders, and government representatives in this effort. In the next seven years, Rodel will target its investments in the six areas of systemic reform that the Foundation believes are central to improvement: teacher quality, leadership development, standards and accountability, school finance, school choice, and family and community engagement.

I have highlighted certain portions of this to make several points:

1.  Vision 2012, as constituted, was a failure.  In seven years the Rodel-led "revolution DID NOT leave Delaware with "one of the finest public school systems in the nation by 2012."  During that time we have made only modest state-wide gains in student performance on high-stakes standardized tests, and we have deepened the divide between the "haves" and "have nots" by creating not only more racially and high-poverty identifiable schools in Delaware than have existed since before Brown v. Board of Education, but we have also allowed entire school districts to become so characterized.

2.  Vision 2015 has carefully backtracked on one of its original essential promises:  school finance.  In the original roll-out, this language was included as a major goal:

In the current Vision 2015 Executive Summary, that language has now been moved down to become a sub-point for the goal that has replaced it:

And if you think this was accidental, changes in school finance completely disappeared in Paul Herdman's recent WNJ editorial about what it will take to re-invent our schools (all of a sudden there were only FIVE recommendations).

Why?  I'm glad you asked.  Because, ah, oops, that hasn't happened.  Take a look at this graph showing Delaware state and local education spending since 2005: 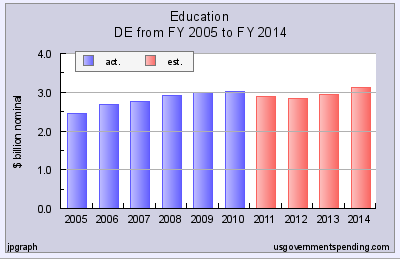 Uh, yeah, we've obviously achieved dramatically higher school funding thanks to the Vision folks, which is why we no longer have State-funded School Resource Officers, or Minner reading/math specialists, and why school districts across the state are AGAIN cutting classroom slots.

If there has barely been an increase in school funding over the past decade, and if our school districts (hello Appo, hello Colonial, hello Red Clay) still "need to rely on local referenda to meet Vision 2015 standards," then where has the money come from for all the "innovations" in the 25 traditional and charter schools that constitute the "Vision Network"?

I can think of several places.

It has come from the pockets of public school teachers who have been so poorly served by their union at the state level that--like all other state employees--we are now in the second term of a governor who wants to be the "education governor," but who has NEVER proposed a salary increase for public school teachers in six years.  In the period 2007-2012 the average teacher salary in Delaware rose only from $56,002 to $57,292--a 2.3% increase over five years.  Find the data here.

It has come via an interesting transfer of resources from traditional to charter schools in a process that has left the city of Wilmington with more racially and high-poverty identifiable schools than has been seen since the Jim Crow days.  During that time the overall State drop-out rate has remained virtually unchanged, BUT ... the white drop-out rate has declined, while the African-Amerian and Hispanic drop-out rates rise steeply.  Data here.

It has come via a systemic transfer of resources from priorities set by local school boards and their district offices to the priorities imposed top-down by Rodel, US DOE (Race to the Top), and DE DOE (with a former Vision Network head now ensconced as DE Secretary of Education).  And woe be unto any district that pursues its own agendas ....

But Vision 2015 (soon, officially, to be Vision 2020) has itself failed in so many ways that a comparison to Fisker Automotive seems in order:

While Vision 2015 has been consuming state funds and Rodel has become the de facto privatized Delaware Department of Education:

Drop-out rates for minorities (see above) have continued to rise ....

Delaware's outcomes at graduation, as measured by SAT scores and not by the homegrown and constantly shifting measures of DSTP, DCAS, or SBA, have remained stubbornly well below US averages: 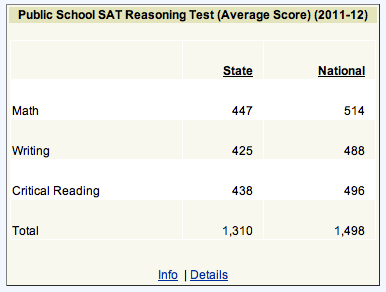 Fisker has never (and will never) produced a car in Delaware, despite millions of state and Federal dollars in loan guarantees thrown its way.

Remember when we were all so skeptical when Fisker kept asking for "extensions"?

Well what the hell do you think changing the target date for educational excellence from 2012 to 2015 to 2020 is, except an extension (worth millions and millions) to the Rodel-back reform movement?

Thank you, Steve. This is great. I've posted on Facebook. Hope it brings you some traffic.

What blogging is all about. Excellent job, Steve. :-)

What needs reforming is not so much the schools as the funding mechanism. Property taxes are an inherently unequal method of funding which guarantees that districts with the most challenges, the greatest needs, and the least capacity to make up for shortfalls will get the least resources. The State or the Federal government may add more funds to make up the difference, or they may not. If we were seriously committed to equality, all property tax revenue would go into the same pool, to be distributed to all districts at an equal amount per student. But of course, that will never happen, because wealthier parents won't stand for it.

The other thing that needs reforming is the American family. In high-poverty districts, yes, providing services such as health care, social workers, afterschool care, adult literacy programs, etc. will help. But if the problem is not poverty (or not just poverty), but rather indifference to education (whether by placing a greater emphasis on sports or other extracurriculars, rejecting education as "acting white," overall neglect and disinterest in the child, excessively permissive parenting, etc.), there is nothing the schools can do about that. If a kid shows up disrespectful, belligerent, uninterested and unprepared to learn, there is only so much the teacher can do. The school has them for about 25% of their time (stats and data from write my essay online academic service writers). The parents have them for the rest. When the parents care, so will the children.