June 10, 2013
Given that the stops on both sides appear to have been pulled out--

--we now know, thanks to Representative Kim Williams (with a nod to Transparent Christina) that the attorney generals office thinks there is possible reason to believe that the Governor's Charter School working group broke the law:


Based on the information you provided and our review, the Working Group may be a “public body” within the meaning of FOIA.  29 Del. C. § 10002.  If that is the case, the Working Group was (and, if still active, remains) subject to the “open meeting” provisions of the Act.  See generally 29 Del. C. § 10004.  Thus, any prior meetings conducted without adequate public notice or compliance with other open meeting requirements may have been held in violation of the Act.

--we also know that, when confronted, Representative Earl Jacques gets really, really testy with school board members:


First the fund you are referring to is not a "slush" fund.  If you attended yesterday's public meeting you would know that it is not used for capital projects.  It is connected to the Charter Performance framework, which will ensure that is used for education issues for either high-performing or high-need students. The money allocated came from the last budget numbers - NOT from the Department of Education.  So this isn't a case of taking money away from our public schools.  In fact, the number one priority, according to the testimony from the School Superintendents to the Joint Finance Committee was money for technology.  That money is in the budget!  The Charter's number one priority was money for this Strategic Performance Fund, which again the Joint Finance Committee granted and is in the budget based on whether the legislation passes.

Let's take a moment to point out Earl's rather fuzzy math here.  There are 19 school districts that serve 85+% of Delaware children, and then there's the charters, which serve about 15% or less.

So fair, according to Earl is giving the 19 school districts $5 million for computers to split among the 85% and $2 million to only certain "high-performing charters" who together probably deal with about 3%.

That seems fair.  And my name is Earl, too.

But that's not the point of this post (think of it as the usual long-winded Newtonian prologue)...

Today, going out via email to parents from their charter schools all around Delaware, were variations of this letter:

If you click that "read more" link you get a PDF document that is--how strange!--completely unattributed to any individual or organization. 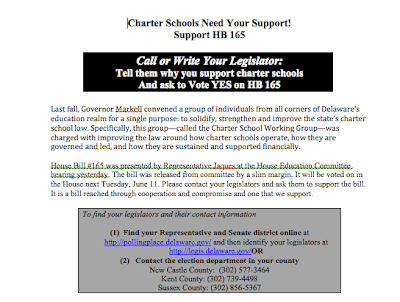 The writing here is not only a masterpiece of cowardly anonymity (say what you like about the Delaware Family Policy Council, they at least have the guts to own their own material), but is also incredibly distorted while at the same time making both Representative Williams' and the Attorney General's point.

To say, "The were charge with improving the law around how charter schools operate, how they are governed and led, and how they are sustained and supported financially," is also to say that there was a WORK PRODUCT expected from this group, which makes it a "public body."

Moreover, the anonymous writer of this broadside very carefully DOES NOT attribute authorship of HB 165 to Representative Jaques:  "House Bill  #165 was presented by Representative Jacques."

Interesting language.  Not that Earl "wrote" the bill (as he has rather unconvincingly claimed) or that the bill was the result of their deliberations.  No, apparently HB 165 was an immaculate conception that Earl simply sort of midwifed on behalf of truth, justice, and conduit capital funding.

Our safely anonymous writer and organization then proceeds to give instructions for how to use "talking points" on your legislator, via email or phone: 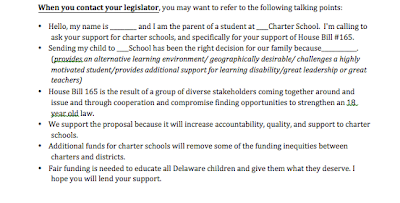 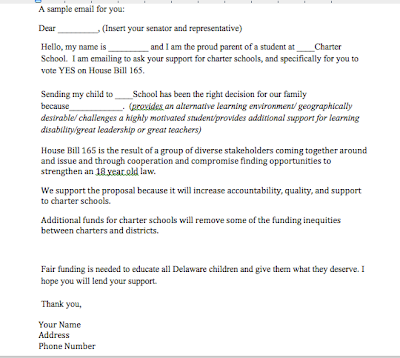 Notice all the wonderful memes that we are putting into play here:

"The result of a group of diverse stakeholders coming together around the issue and through cooperation and compromise ..."

Uh, hold the f--king phone here, folks:  exactly who in the room, according to the only list any of us has ever seen, was not directly related either to charters or Vision 2015 (excuse me, Vision 2020)?

"Additional funds for charter schools will remove some of the funding inequities between charters and districts."

You mean like the left-over transportation funds that charter get to keep but districts must turn back to the state?

"Fair funding is needed to educate all Delaware children ..."

And good ole Rebecca Taber, and Earl Jaques, and even Governor Markell are so worried about fair funding for ALL Delaware children that's why they have sat back on their wide-bottom chairs and done nothing while virtually every district up and down the state is cutting classroom teachers and paraprofessionals?

What the totality of all the diverse issues surrounding HB 165, and Vision 2020, and Rodel, and DSEA, and all of them is not a discussion of educational priorities in Delaware.

What we're seeing is bare knuckles, bare-naked political power, sort of the legislative equivalent of a motorcycle gang fight at Hooters.

And you are right--but unless you actually strip off the link it is one of those direct download deals wherein you never see it.
June 10, 2013 at 10:32 PM

Citizen said…
Can someone remind us who the Charter Network's lobbying firm is? it's a Wilmington outfit said to be very good; but I don't know that world & can't remember the name. Someone is paying them big bucks, b/c apparently they are in Dover all the time working our legislators. They seem to have done a number on Earl Jaques in recent weeks.

Maybe DE's friends of trad'l public schls (and their students) can Kickstart a lobbying fund for our side, online. How much would we need to come up with?!
June 10, 2013 at 10:47 PM

Nancy Willing said…
Their lobbyists have been very busy this year:
https://egov.delaware.gov/lobs/Explore/EmployerDetails?id=538

kavips said…
Considering the anonymity surrounding their web page one would think they were as scared as mice... Which could be, considering the plural of mice is Meece
June 11, 2013 at 2:12 AM

pandora said…
Wow! That's a lot of talk about money. Not that we had any doubt that this was about charters getting more money, but still...

Citizen said…
Meanwhile, as I've posted elsewhere, the benighted NJ has published not ONE of the several letters they received opposing this bill, nor the DE Voices column they solicited from a prominent DE teacher & former board member concerned about district schls, nor a Voices column offered to them by the UD Econ prof who has been analyzing segregation via charters in this state.

And they certainly have not had other, more urgent matters to highlight on their Opinion page.

So much for a free press. Libertarians and Liberals, pls cancel your subscriptions if you have them. The blogs are where to learn what's really happening in DE. NJ is a decoy (as we've known--but this is really remarkable).
June 11, 2013 at 7:12 AM

Citizen said…
BTW, 2-3 wks ago when I was in email contact with Rep Jaques about the poorly worded nutritional asst. provision in HB 165, he replied at one point (in relation to my request that the federal breakfast program be explicitly included) that he would need to "check with the Charter Schls Network" about that (then he wrote back to say that yes, they planned to include b'fast & there was no need to include it in the bill!!). This was b4 the bill was publicly available.

March 31, 2013
In my post about the idiotic over-reaction to a New Jersey 10-year-old posing with his new squirrel rifle , Dana Garrett left me this response: One waits, apparently in vain, for you to post the annual rates of children who either shoot themselves or someone else with a gun. But then you Libertarians are notoriously ambivalent to and silent about data and facts and would rather talk abstract principles and fear monger (like the government will confiscate your guns). It doesn't require any degree of subtlety to see why you are data and fact adverse. The facts indicate we have a crisis with gun violence and accidents in the USA, and Libertarians offer nothing credible to address it. Lives, even the lives of children, get sacrificed to the fetishism of liberty. That's intellectual cowardice. OK, Dana, let's talk facts. According to the Children's Defense Fund , which is itself only querying the CDCP data base, fewer than 10 children/teens were killed per year in Delaw
20 comments
Read more

A reply to Salon's R. J. Eskrow, and his 11 stupid questions about Libertarians

March 29, 2014
Posts here have been in short supply as I have been living life and trying to get a campaign off the ground. But "11 questions to see if Libertarians are hypocrites" by R. J. Eskrow, picked up at Salon , was just so freaking lame that I spent half an hour answering them. In the end (but I'll leave it to your judgment), it is not that Libertarians or Libertarian theory looks hypocritical, but that the best that can be said for Mr. Eskrow is that he doesn't have the faintest clue what he's talking about. That's ok, because even ill-informed attacks by people like this make an important point:  Libertarian ideas (as opposed to Conservative ideas, which are completely different) are making a comeback as the dynamic counterpoint to "politics as usual," and so every hack you can imagine must be dragged out to refute them. Ergo:  Mr. Eskrow's 11 questions, with answers: 1.       Are unions, political parties, elections, and
57 comments
Read more