10 reasons to believe Delaware is a police state 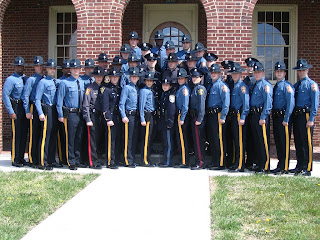 10.  "Universal" background checks for person-to-person firearms exchanges are constituted so that current and retired police officers are exempted from this scrutiny, even though there is ample reason to believe that law enforcement officers (including the retired) commit suicide more often, are prone to domestic violence, suffer high rates of alcoholism/depression, and are resistant to seeking help for mental illness.

9.  Those semi-universal background checks can be examined by law enforcement agents any time, without probable cause, without a warrant.

8.  Red-light traffic cameras turn out (as Libertarians predicted) to be all about raising revenue, and not so much about traffic safety (which seems to be exactly what Secretary of Safety and Homeland Security Louis Schiliro ordered).

7.  The Wilmington Police Department has an incredibly high usage of tazers to subdue suspects (a fact that is only reported about when somebody dies after being tazed and the WPD spokesman says there is no story here, move along folks).

6.  Our police departments don't run their DUI checkpoints according to their own policies, and get away with it until a good attorney (not a good newspaper) calls them out for it.  [Now what they will do is rewrite the policies, because--guess what?--nobody else has to approve them!]

5.  The New Castle County Police Department snapped images of over 164,000 license plates in 2011-2012 and placed them in a database to be maintained for a year, even if the people/cars associated with them weren't doing anything wrong.

4.  Of course, that makes the NCCPD look good, compared to the Delaware State Police, which hid how many ALPRs [Automated License Plate Readers] it has from an ACLU FOIA request, maintains those records of innocent drivers for FIVE years, and has sharing agreements with almost every Federal agency except Voice of America (and they are working on that one).

3.  With crime and gun violence spiraling out of control in Wilmington, the Department of Safety and Homeland Security purchased and outfitted a "Maritime Unit" instead of tackling crime in the city.

2.  Beau Biden's Chief of Staff has now floated new potential restrictions on Concealed Carry Permits, not because there is any evidence that the weapons are misused by those who have such permits, but because too many citizens are asking for them.

1.  Delaware's "fusion center"--the Delaware Information Analysis Center [DIAC] at 1575 McKee Road in Dover--does not have a separate, accountable budget line, civilian oversight of its operations, or direct accountability to ANYONE outside the self-made (OK, corporate-made) millionaire Secretary of Safety and Homeland Security Louis Schiliro, who claims to need a bigger budget to keep us "safe," even though his own budget has doubled over the past five years, and by his own admission the greatest terrorist threat to Delaware is ... snow storms and the occasional hurricane.

We hear a lot about "connecting the dots," well here's an exercise for you:  in the second-smallest state in the nation we have at least 56 separate organizations with law enforcement powers.  We also have five times as many police officers per capita as California.

Isn't it time--especially with a retired State Trooper as Speaker of the House of Representatives--to be asking ourselves exactly who is in control here?

This is no longer an issue for partisan politics, or at least it shouldn't be.  Yet neither Democrats nor Republicans seem interested in any effort to rein in our out-of-control surveillance/police state.

By the way, while you're on the subject, in 2011, 2,551 Delaware citizens lost their right to own firearms (forever!) because they were busted for misdemeanor marijuana possession.

Just thought I'd throw that one in there for those of you haven't quite figure out the the POLICE LOBBY in Delaware prefers our citizens to be UNDER SURVEILLANCE and UNARMED.

mynym said…
People in other states are fighting back... technology is decentralizing (RIP Aaron Swartz) just as the $tate is centralizing, so we'll see how it plays out. Man tells police that they're cowards. Fast forward to the end, the laugh that the poor old black guy gets out of it is funny.
August 5, 2013 at 4:10 PM

Unknown said…
Any possibility that you will begin posting here again? I’ve enjoyed reading through here. Just discovered this a month or so ago. Unfortunately, I understand much of what you’ve posted. Your postings are bold and come right out and tell the truth. Thank you.
March 7, 2019 at 11:42 PM

March 31, 2013
In my post about the idiotic over-reaction to a New Jersey 10-year-old posing with his new squirrel rifle , Dana Garrett left me this response: One waits, apparently in vain, for you to post the annual rates of children who either shoot themselves or someone else with a gun. But then you Libertarians are notoriously ambivalent to and silent about data and facts and would rather talk abstract principles and fear monger (like the government will confiscate your guns). It doesn't require any degree of subtlety to see why you are data and fact adverse. The facts indicate we have a crisis with gun violence and accidents in the USA, and Libertarians offer nothing credible to address it. Lives, even the lives of children, get sacrificed to the fetishism of liberty. That's intellectual cowardice. OK, Dana, let's talk facts. According to the Children's Defense Fund , which is itself only querying the CDCP data base, fewer than 10 children/teens were killed per year in Delaw
12 comments
Read more

A reply to Salon's R. J. Eskrow, and his 11 stupid questions about Libertarians

March 29, 2014
Posts here have been in short supply as I have been living life and trying to get a campaign off the ground. But "11 questions to see if Libertarians are hypocrites" by R. J. Eskrow, picked up at Salon , was just so freaking lame that I spent half an hour answering them. In the end (but I'll leave it to your judgment), it is not that Libertarians or Libertarian theory looks hypocritical, but that the best that can be said for Mr. Eskrow is that he doesn't have the faintest clue what he's talking about. That's ok, because even ill-informed attacks by people like this make an important point:  Libertarian ideas (as opposed to Conservative ideas, which are completely different) are making a comeback as the dynamic counterpoint to "politics as usual," and so every hack you can imagine must be dragged out to refute them. Ergo:  Mr. Eskrow's 11 questions, with answers: 1.       Are unions, political parties, elections, and
43 comments
Read more