Time for anti-drone legislation in Delaware

You won't actually find any current Delaware legislators following through on this idea because ... neither the Democrats nor the Republicans actually give a rat's ass about drones in our skies.

But they are coming.

That's not so much what worries me, though.  It is the response of the Delaware State Police to a FOIA request about drone usage from two months ago that is giving me prickles on the back of my neck: 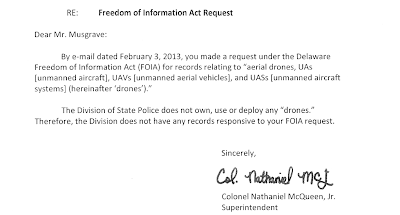 1.  This is the letterhead on which the request was returned: 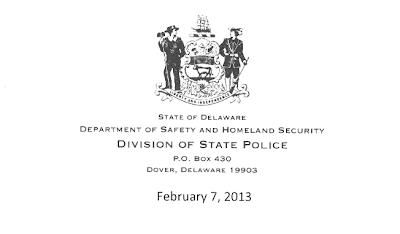 Note that the letter did not say that the Department of Safety and Homeland Security does not use or possess drones, just that the Division of State Police doesn't.  This answers the question actually posed by the requestor, but does so in a way that leaves open the question about whether the larger organization may have some records.

2.  The response says that the DSP "does not own, use, or deploy" drones, but it does not discuss whether or not there are future plans to do so.  Again:  not asked, so not answered.

Many states are currently considering anti-drone legislation, or at least legislation that closely regulates the use of such unmanned aerial vehicles.

Delaware needs to do so as well--but, of course, you won't see that happening.
Posted by Steven H. Newton at 3:38 PM

UAVs (Drones) have many safe, practical and profitable uses. The media has attacked these things like they are the plague without knowing anything about them or even trying to understand them. Yes there is potential for abuse and misuse as there is with anything that you can buy, own, drink, eat, drive or fly. But we do not need a host of new laws to govern (ban & restrict) UAVs. New commercial UAVs have flight limits built in to protect full scale aircraft. The camera's that come with these are wide angle, almost fisheye lenses so at an altitude of 60 or 70 feet you cannot identify the people below it, so that kills the privacy issue. Can you invade someone's privacy with one? Yes, from a distance of 10 to 15 feet from your target you can get a good picture. But without spending $30,000.00 for a flying super camera you are not going to do it from any distance that people won't see it. We already have laws and regulations in place that can deal with any misuse so don't get your panties in a wad over drones. Before you condemn them, get to know them, know what they are capable of what the dangers really are and what good they can do. Don't take the word of someone who has never seen one other than on youtube and don't spread hype and lies just to put your name to a column. The US is years behind every other foreign country in the world as far as the use of UAVs for both private and professional purposes. The reason for this is the news media has to hype it up for the mere sake or ratings and the government has to over investigate and over regulate as they do everything else. Bottom line is, don't knock something you don't know anything about.