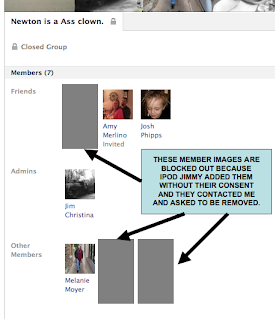 In the first deft move, the standard bearer for IPOD in northern Delaware condemns a Libertarian rather than actually taking on, say, anybody in office.

The UPDATE:  it turns out that good old IPOD Jimmy has been adding people to his group without their knowledge.  One of them contacted me and asked to be removed from the photo.  I was happy to oblige, and if you are also listed here and did know he was using you for his infantile vendetta, please let me know.

The second UPDATE:  it turns out that IPOD Jimmy added more than one person without his or her knowledge.  That person has also contacted me and asked to be removed because they didn't know that this had happened.

The third UPDATE:  yet another person was added to this group without his or her knowledge.  It pretty much seems that once people discover the company they are keeping, they cannot wait to get out.

My fan club is apparently getting smaller and smaller each passing day.  Soon there will only be a single troll left.
Posted by Steven H. Newton at 12:09 PM

@ Ass Clown newton. Jim is not a registered IPod. Get your facts straight.

Really? How old is the person that started this page? No wonder this flipping state is a police state!! This is how it's citizens spend their time? Don't bother informing your friends and acquaintances of CISPA, gun control, the new health care legislation and the illegal search and seizures running rampant throughout the state. It's more important to make sure everyone knows that you think, "Newton is an Ass Clown". We're doomed! Sickening!

The reason she asked to be taken off.... She doesn't want to be on your pathetic excuse of a blog.
No one in that group wants to be in your blog. Or asked you to put them in your blog.
So take us all of your blog.

Off of your blog.

Here is what the young lady sent me via FB message with her name removed:

"i seen your blog on Delaware libertarian about hitting the big time im sorry but i have no clue why im in this some Jim guy added me to the group im sorry but can you please take your post down I've left the group if you want to redo the post im sorry for the trouble."

"Some guy named Jim" that she apparently doesn't even know.

So keep it up, son. I just publish the trash you create.

More lies from the brave ass clown behind the computer.

Ok sport we all would like to be removed...

We don't want to be on your pathetic and trashy attempt of a blog... Got that sport?

I could care less what you want.

I removed a person you victimized by including without her consent. Anybody else who wants to message me personally and tell me they didn't give consent to join your little group, I will extend the same courtesy.

I only hope the others are happy with the attention you've brought.

I'm happy with my pathetic little blog, thanks.

What a big man you are... Let me buy you a pack of gum

I will show you how to chew it.