How the issue of raw milk gets distorted by politicians and the dairy industry ...

One of the advocates for raw milk wrote about his experience in lobbying the General Assembly this past week, and noted that one of the opponents of legalization was a dairy farmer who worried that raw milk would give "a black eye to his industry."

This went along with people citing the usual parts of scientific studies about all the "dangers" of allowing people to choose for themselves what they put in their bodies.

It is important to note that many of the most significant scientific studies actually DO NOT come down 100% against raw milk legalization.  Take, for example, the Purdue University Extension Study that is often cited by raw milk opponents.  Yes, Perdue scientists clearly believe there is somewhat more risk to drinking raw milk, and are clearly dubious of the health advantages to be gained therefrom (more on that in a moment), but this is the part that you never see quoted, for some obscure reason: 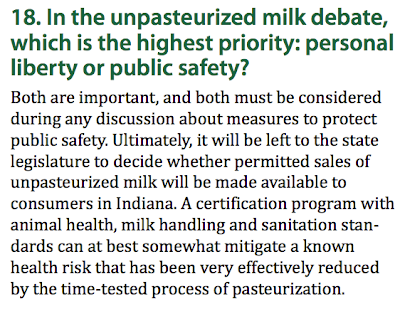 Why is that a bad thing?

It's at the very least disingenuous because it does not take into account that one of the reasons that many consumers prefer raw milk is because of the lack of growth hormones and antibiotics (as well as the bad effects of feeding dairy herds on grains and soy) that one finds in non-organice pasteurized milk.

(Beware, this is a long quote, but it is critical to understanding the issue)

Is the milk from grain-fed cows less healthful than the milk of grass-fed cows?Yes. Almost all of the long-chain polyunsaturated fatty acids (PUFAs) in milk are the result of what the cows eat; when cows graze on grass and mixed greens, it improves the fat composition of their milk, equalizing the ratio of omega-6 to omega-3 fatty acids. This ratio is believed to be ideal for human health because it helps raise good cholesterol, lower triglycerides, and reduce inflammation. Research suggests that a cow raised grazing on its natural diet of fresh pasture also has five times more conjugated linoleic acid (CLA), a cancer-fighting fat.

By replacing a cow's grass diet with grain, the ratio of the essential fatty acid in the milk is greatly altered. Milk from commercially raised cows whose feed contains blood meal or bone meal has a more detrimental fatty acid composition and contains little, if any, CLA.
It’s not easy to find milk products from dairies that raise cows on open pastures. Some organic dairy cows are grass-fed, but not all. Nevertheless, consumers are buying organic milk and dairy products in record numbers.

Organic or Conventional?
The U.S. dairy industry has always been quick to adopt new technology and management techniques to improve milk production and efficiency. Although the number of cows and dairy farms in the United States has declined in the past 50 years, the average herd size and milk production per cow has increased.

To increase milk production in cows, many U.S. dairy farmers inject their herds with recombinant bovine growth hormone (rBGH), also known as recombinant bovine somatotropin (rBST) and Posilac. All milk contains natural levels of bovine growth hormone, a substance produced by the pituitary gland of the cows. The United States, however, is the only country that has approved rBGH injections to increase cows' milk production.

An estimated one-third of all cow herds at conventional dairies are given rBGH injections, but the U.S. Food and Drug Administration (FDA) does not require milk producers to place any identifying labels on milk produced by cows receiving these injections. The FDA claims that rBGH has no effect in humans and declared it "safe for human consumption" in 1993.

Research has not connected the IGF-1 levels in milk with increased cancer risk, although high levels of IGF-1 in blood have been linked to rapid cell division and the formation of cancerous tumors. Exactly how ingestion of milk products from rBGH-treated cows affects IGF-1 levels in the blood is not clear. Some studies done on rats suggest that IGF-1 can be absorbed into the bloodstream from the digestive tract, but other animal studies found that the amount of IGF-1 entering the blood stream was too small to be significant.

Then again, some research suggests that IGF-1 may not need to move to the bloodstream to pose problems; numerous IGF-1 receptors exist within the intestine, allowing it to act on the intestinal wall lining. Some researchers believe the additional IGF-1 may promote the growth of existing cancers. Given the high incidence of colon cancer in many countries, any extra IGF-1 exposure in the colon could be worrisome.


Now it is true that the FDA certified rBGH as completely harmless back in the 1990s, but one of the things that the dairy industry flaks (bless their growth-hormone-expanded hearts) won't tell you is that the FDA study was marred by serious allegations of conflict of interest, in that the government regulatory agency used a number of dairy industry scientists who had been involved with the development of rBGH to help them study whether or not it might be harmful.

Don't worry, though:  the FDA later investigated the FDA and declared itself free of conflict of interest.

I feel better, now, don't  you?  Unfortunately, if you actually try to hunt down reputable scientific opinions on rBGH, it turns out that all the footnotes always lead back to the study conducted (at least in part) by the people who developed the hormone and who had a personal financial interest in seeing it cleared.

So next year, when raw milk comes back to the General Assembly, we need to all be better prepared to refute the buffoons who claim it will give a "black eye" to the industry that pumps American children full of rBGH and antibiotics ...

By the way, if you are a raw milk supporter and you've read this far, please consider two things right now, before you leave this page:

1.  Look over to the right and subscribe to the Libertarian Party of Delaware newsletter in order to find out where and when you can meet with other people who value their freedom and their health more than obedience of corporations and politicians.  We'll keep you updated, and if you find out that it is not to your taste you can unsubscribe any time.

2.  Please realize that the Libertarian Party intends not just to support raw milk legislation next year, but to make raw milk an election issue in 2014 if we don't get a bill passed next session.  To do that we are going to need everyone's help.  Right now we are conducting a very painless fundraising exercise, asking people to be willing to pledge $5 or $10/month to help the LPD support its candidates.  We've targeted some districts where we think the kind of games the Dems and GOPers play are making people really unhappy, and we believe we can make a big impact in 2014--even possibly win a seat in the House of Representatives.  And when WE go to Dover, so does YOUR issue.  Please consider subscribing or making a one-time donation.  The more that we raise this year, the louder our combined voices will be next year.

And ask yourself--what other political party reached out to you this year?
Posted by Steven H. Newton at 8:02 PM