Playing In The Garden...

As in Madison Square Garden!

Tonight I'll be in New York to see the remaining members of the Grateful Dead perform there.

On my 22nd birthday (September 16, 1993) I was lucky enough to have 4 mail order tickets (directly from Grateful Dead Ticketing) in the 8th row, right in front of Jerry Garcia.

Man, what a show that was...just like every show I saw the Grateful Dead play at the Garden...intense, with incredible crowd energy.

Literally the entire place, which is suspended on some sort of cable system (at least according to drummer Mickey Hart), rocked to all the dancing...you could feel it almost bounce you slightly off the floor.

Obviously the band is now in their twilight and will never whip up the musical frenzy they did when Garcia was alive. But it will still be a great time amongst old friends.

Since I don't have links to any of The Dead's recent reunion shows, here is that show from September '93, for those who might want to take a listen...(it is a soundboard, so they are tweaking it a bit in the first few tunes).

Setlist from the show (note the last tune!!) :

"Ooh, freedom
Ooh, liberty
Oh...leave me alone
To find my own way home"
And here's one for the road...from September 16, 1978 @ the Great Pyramids on the Giza plateau in Egypt, during a full lunar eclipse!

How many even legendary rock bands can say they played the freakin' Pyramids?!? 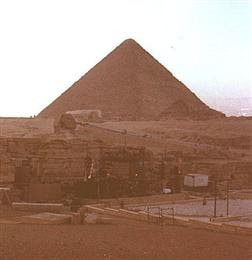 Have a great weekend, everyone!!
Posted by Tyler Nixon at 12:17 PM

a most peculiar nature said...