Could His Fellow Senators Be A Bit Tired of Joe?

As if Joe hadn't already (only-half-jokingly) complained about what increasingly looks like his bit player role in the Obama administration....("Since the race is over, no one pays attention to me at all.")

BIDEN TO BE BARRED FROM SENATE DEMOCRATIC CAUCUS MEETINGS AS PART OF REID EFFORT TO RESTORE CHECKS AND BALANCES
"The new Congress will reassert its constitutional independence from the White House by barring the vice president from joining in internal Senate deliberations, Senate Majority Leader Harry Reid said in an interview with The [Las Vegas] Sun.

The move is intended to restore checks and balances to a system that tilted heavily toward the White House in the Bush presidency. 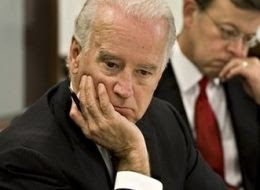 So much for senatorial courtesy...

I do applaud Reid for his purported 'restore checks and balances' assertion, but let's be real -- I suspect they don't want Joe Biden interfering, especially now that he will be looking for ways to stay relevant...or at least stay in the media spotlight.

To his credit Biden is certainly no Dick Cheney. But then Biden will never possess much less wield anything resembling the power Cheney did. That Harry Reid seems to think so is rather laughable.

Bottom line : Joe's no longer in the club and he will have to get used to being constantly on the sidelines. Perhaps Biden may come to regret leaving the Senate. But I doubt it.
Posted by Tyler Nixon at 7:20 PM

Maybe I'm just stating an obvious point, but isn't this pretty much how it's supposed to be? It seems to me that this is just an effort to correct an inconsistency in how the government was running, rather than a slight on Biden.

Hmmmm, Joe. A Democratic Senator is elected Vice-President and the first thing his own party's Senate leader says is that he will "absolutely not" be permitted in caucus.

I think this rather stark public statement is as much about Biden as it is about separation of powers. I am not saying it's a slight, just a tacit statement that they don't want Biden meddling - which I gather they believe would be the case.

I seriously doubt that this is the first thing Reid has said about Biden's election!

I agree that he is being firm in his conviction, but I don't think it's for the reason that you state. I would think it's because the Dems want to make certain that they will not carry on the Rs new tradition, whether the Veep is Biden or not.

Good on 'em! I don't want Biden in there either, whether he plans on meddling or not.