I Do Not Trust This Illinois Democrat 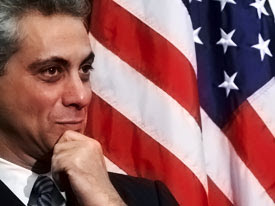 Barack Obama Chief of Staff Rahm Emanuel's entire adult life appears to be driven to serve his own personal accumulation of wealth and power.

If he played any part in taking down Democrat Illinois Governor Rod Blagojevich, it is laughable to think it was a matter of public integrity or conscience.

If anything it was pure self-protection, looking after his power franchise, perhaps with a little dash of taking down an inconvenient Illinois Democrat thus creating an advantageous power vacuum easily filled by Emanuel-Obama loyalists.

ProPublica's Ben Profess has penned an interesting glimpse at what a ruthlessly self-serving DC/Wall Street wheeler-dealer Emanuel is :

I think Obama's going to see a lot of problems eventually arise from what will be going on under his radar with mercenary Clintonistas like Emanuel run amok in his White House...right at the top.

Dare I say it will begin immediately with campaign finance, since we are unlikely to see all that astounding 2008 campaign "grass roots" money flowing again to Obama, after 3+ years in office takes the bloom plenty off his rose.

Obamamanuel will need huge money to capture a second term and I have no doubt Emanuel's ilk will do whatever it takes to secure their bankroll from the usual big money suspects looking for some of that good ole inside-the-beltway love.

I hope Obama doesn't also adopt the Clintons' smoke-and-mirrors scandal response playbook, heavy on faux-outrage and shrill diversionary partisan attacks.... of course, all through proxies....like Emanuel was to the Clintons.
Posted by Tyler Nixon at 12:34 PM

We all know this routine: Democrats are not allowed to be successful in business, only Republicans are. It's prime facie suspicious in the former case but not in the latter.

BTW, where did I say anything about Republicans? To me, the whole Bush administration was filled with people like Rahm Emanuel.

Also did you read the links about how he was "successful in business"?

He was successful alright...in enriching himself.

As far as "business", what did he create of value, if anything?

"Business" involves the creation of value in the marketplace, which receives an excess of private money in voluntary payments versus what was expended to produce the value in question.

It is NOT a series of cushy jobs through political favors.

Incidentally, it's rather silly to bring up the "but Republicans do it too" argument here -- I, at least, will readily acknowledge that the Republicans are at least as scummy as the Democrats on this issue (and many others).

I'd urge Democrats to hold themselves to higher standards than "the GOP does it too!"