Freedom of Expression ends where violent intent begins is Nancy Willing's response to the controversial Sean Delonas' cartoon in which the dead chimp is perceived by many viewers as representing President Barack Obama.

Was New York Post's Sean Delonas' message really conveying only that the stimulus was written by a chimp-brain of a congress as claimed? Most people have concluded that the cartoon is suggesting assassination of one Barack Obama and conveying that this big black ape has to be stopped.

Notice the juxtaposition of themes between the title of the post and the sentence in bold above: Nancy says freedom of expression ends with violent intent, but the standard suggested in the post itself is not what the artist intended, but what most people have concluded.

Hold that thought for a moment.

Now let's go back to the guy stopped in Oklahoma for his Abort Obama not the unborn sign on his truck, had the it confiscated by the police, and was then interviewed by the Secret Service. The police chief, interestingly enough, considered the cop who stopped the motorist to be over-zealous.

Here's the response from one commenter (noman) at Delaware Politics:

The pro-life movement has stated over and over that abortion is murder. It is entirely reasonable to construe the slogan as a threat.

There are plenty of nuts who would be happy to use that slogan as a dog whistle for a real threat. Even if the guy was just using it as symbolic language, it was worth checking him out.

Notice the similarity of the standard noman proposes to that which Nancy Willing endorses: it's not actually the intent of the individual making the statement that matters--it's how that statement is interpreted by observers that matters. And both noman and Nancy have moved right past the it's offensive or it's racist directly into it's an incitement or announcement of intended violence.

Now let's consider a representational review of the 2006 film Death of a President that appeared in Film Review International:

Alternate history is a perennial of science fiction and has even occasionally been used as a hook for journalistic political analysis, as in the long-ago Look magazine cover-story imagining of President John F. Kennedy's first thousand days. Much more recently, Sean Penn starred in the alt-history drama The Assassination of Richard Nixon (2004). That the British faux documentary Death of a President--conceived as a 2008 TV-news special about U.S. President George Bush's assassination nearly a year earlier and the sociopolitical fallout from that event-has been condemned sight unseen by politicians and pundits from James Pinkerton to Hillary Clinton is understandable and completely predictable: They can't not comment, so when they do, they have to play to their audiences. None of them seriously believes that this work of fiction will really make someone take a potshot at the president, and anyway, the attempt on President Ronald Reagan's life came out of a crazy guy's fascination with Jodie Foster, so you may as well decry movies starring blonde former child actresses.

Before I make the necessary point about intent, I should point out that most reviewers considered it a pretty so-so movie. This is a typical response:

For all the controversy surrounding it, Death of a President is a rather bland film that feels like little more than a television documentary.

Now, remember that what I'm interested here is violent intent, not racism or bad taste--both of which are protected speech no matter how much I may not like them.

So let's go back to our two original exhibits, and ask:

1) Did Sean Dilonas seriously mean to advocate the assassination of President Obama? Given that I haven't read anything about the Secret Service visiting his office, I sincerely doubt it. This is a cartoonist who has recently compared gay marriage to people having intercourse with sheep.... His intent is clearly to provoke or offend. Is he responsible for a whack-job or klansman who might read the cartoon finds in it a motivation to go out and take a potshot at the President? No. As cassandra pointed out at DL, if you Google "Obama" and "chimp" you'll pull up hundreds of thousands of images.

The Dilonas cartoon is clearly significant more because of where it appeared than what it portrayed.

2) And Hal Harrison? Does his Abort Obama sign in Oklahoma signify an intent toward violence? Return to noman's standard: The pro-life movement has stated over and over that abortion is murder. It is entirely reasonable to construe the slogan as a threat.

So, if I were to hold the position that abortion is murder, noman believes that I give up the right to use either symbolic speech or hyperbole in a political statement?

Hal Harrison now has a permanent Secret Service threat file on his record, even though the local police chief admits he should not have been stopped. 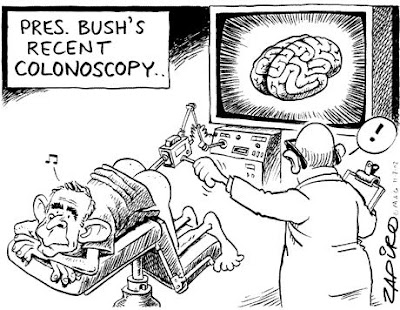 Or maybe the printing of this cartoon should have been the source of a national outcry (that I don't remember):

Or should the US have sent a stiff note to Australia for this implied death threat? 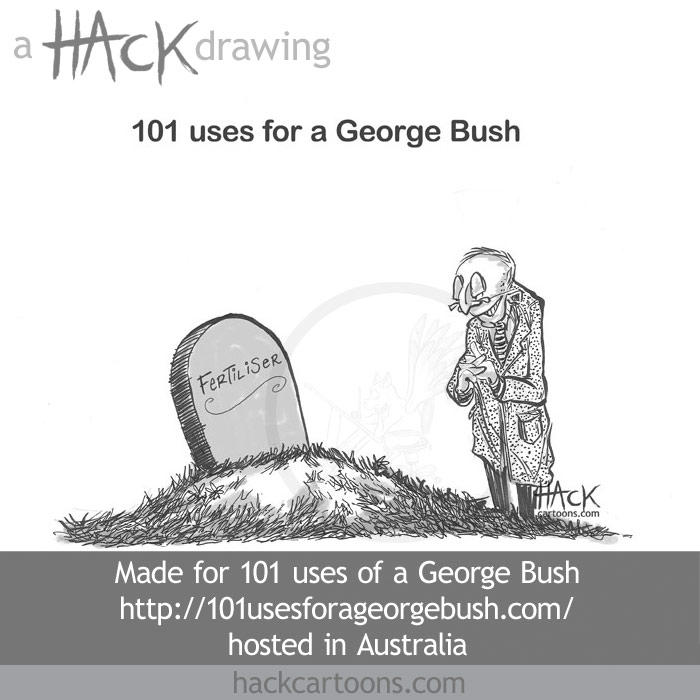 No. All of those were legitimate uses of freedom of expression in political thought. Offensive to many but hardly meeting the standard of violent intent that is being waved around so easily these days.

Why have some people then attempted to play this violent intent card instead of denouncing racism or the offensive nature of the political commentary?

My not-so-diffident suggestion: because it is pretty well established in First Amendment law that you can't engage in censorship or prior restraint for offensive speech, but something like incitement to riot is a completely different...

You can get away with using the concept of violent intent to discredit or muzzle folks with unpalatable political ideas, if you can barrel right on through, maybe finding a sympathetic judge along the way.

This is one of those made-for-libertarians issues that garners us no real friends among any segment of the American political machinery--the idea that moderation in the defense of free speech is no virtue, and extremism in its defense is no vice (sorry, Barry--too good to pass up).

But in today's world wherein competing narratives have all but replaced serious political dialogues based on fact--from either Republicans or Democrats--I'm not willing to compromise this one, even if it costs me political allies, or costs Libertarian candidates votes.

Where are the Dixie Chicks when you need them?
Posted by Steven H. Newton at 9:15 PM

I've always disliked the "violent intent" and "inciting a riot" exceptions that have crept into the First Amendment, mainly because they seem to be misused in cases like this more often that they're used for their stated functions. (Also, I find it philosophically problematic that the determination of whether the speech is legal depends on how other people react to it.)

However, I don't see this as necessarily being the kind of issue that need push the rest of the political spectrum away from us. One tragic consequence of the conflation of "society" and "government" in popular parlance is that some sectors tend to falsely accuse libertarians of being selfish loners. It's worthwhile to point out with issues like this that we actually are the only political group willing to consistently stand up for the rights of others. We may be criticized by some, but it's also outreach towards the civil libertarians who mistakenly think they're leftists.

I wonder how Nancy came to the conclusion that "most people conclude" the 'toon was referring to Obama's assassination. And noman, too regarding the car placard.

I'd come to the conclusion long ago that free speech is fine for liberals ... up until the time you say with which they vigorously disagree. Then it's "threatening" or "hate speech" or "creating a hostile environment" or some other such nonsense.

The Chaplinsky "fighting words" standard has been so relaxed over the years that really only speech that's an immediate and definite threat is not protected speech.

Once we get into the "it depends on who was offended" that determines intent, we're in trouble.

Without time to absorb the entirety of your post (whew), let me say that you err in asserting that I valued one or the other POV.
I stated both, no?
The segments following were two captioning attempts; my own interpretations' juxtaposing the cartoons'imagery and captioning...a mere reconstruction of circumstances, news. You have the real-life cops shooting of the neighbor-eating ape and a newly minted stimulus bill.
Da funky. I smell something skunky.

I should add, to make it clear, the post didn't conclude that the intent was there purposefully nor that it met that criteria without any doubt. I just defined the line that one draws with speech under one's purview.

Most bloggers, for instance, cut off a comment that expresses violent intent of some kind as in against the president, let's say. Explicitly. If the commentor persists, they get banned.

Attytood has that caveat right up in the right hand corner. Comment Etiquette, if you will.

Hube, your reading is perhaps confined to the wingnuttysphere?

Nancy
For my purposes I don't care who liked or who disapproved of the cartoon. It's not germane to my point.

Your post had a title that asserts that freedom of expression ends when there is violent intent, and then you asserted that "most people" conluded that Dilonas was advocating the President's assassination. That's what you said, I quoted it, and I did not take it out of context.

The statement "freedom of expression ends where violent intent begins" can only be taken one way. If freedom of expression ends, who ends it? In this context, only the State, because the State is the guarantor of that freedom. So it seems reasonable to conclude that you are arguing (if you really believe the cartoonist meant to stimulate talk about killing President Obama) that the Secret Service should have investigated Sean Dilonas exactly as they did Hal Harrison.

The ONLY difference between the two cases is that Dilonas has an audience of millions, and Hal Harrison is pretty much only seen by folks driving around in Oklahoma.

Invoking this kind of rhetoric is the reason I object to hate crimes, speech codes, and various other attempts to regulate political free speech.

You either accept freedom of speech with all of its unlovely and downright nasty externalities, or you don't.

I personally find most of Sean Dilonas' cartoons offensive, which is part of the reason I do not buy the NY Post or access it online.

Nancy, if you did not mean to "[assert] that [you] valued one or the other POV," then you probably should have phrased your post title as a question and not a statement. If one person misunderstands your meaning, that person probably misread you. But since Steve, Miko, Hube, and myself have all misread you, the odds are that your post was not clear enough. If you meant something else, then you should probably write a clarification in an update or a new post.

Hube, your reading is perhaps confined to the wingnuttysphere?

I'm not the one who made the comment "most people," Nancy dear. You did.

But since Steve, Miko, Hube, and myself have all misread you, the odds are that your post was not clear enough.

Which ain't a surprise at all since her posts are only rivaled by the DLers for poor grammar and spelling. (Hell, even Kilroy's, despite the spelling, make sense.)