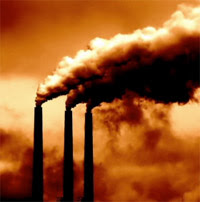 At what point is enough enough??

I hope Governor Markell begins to look at permanently "sunsetting" all state permits for this antiquated pollution-belching nightmare, smack in the middle of the northern half of Delaware.

When it was foisted on a sleepy part of lower New Castle County by J. Paul Getty circa 1953, things were different. Now 1000's of families and individuals live and work within close range of this site.

The potential and real harms to these communities and Delaware's environment have gone on far too long. Clearly the string of corporate owners of the Delaware City refinery are simply not (and have never been) interested in even bare minimum emissions compliance.

This is a clear-cut case where profits are maximized for a few at the expense of directly endangering many people.

Thanks to the horrible Ruth Ann Minner administration these profiteering polluters have gotten away with murder in this century so far.

Alan Muller at Green Delaware has been all over this for at least a decade. It is time policy makers in Delaware pay heed to Alan's prescience about this, and other issues involving reckless environmental damage caused Delaware by legacy polluters.

Please end this, Governor Markell. Clean energy is close enough at hand to begin mapping the light at the end of the tunnel for this industrial blight on Delaware.


'Things could have been a whole lot worse,' DNREC engineer says of refinery's troubles

By JEFF MONTGOMERY
The News Journal

Problems that triggered a large pollution release at the Valero refinery near Delaware City on Feb. 16 took a turn for the worse Wednesday, prompting a shutdown and major repair notice for one of the plant's larger refining units.

Ravi Rangan, a Department of Natural Resources and Environmental Control engineer assigned to the refinery, said Valero had recovered from the original steam and boiler problems that disrupted operations Feb. 16. But the company was unable to resume use of its 50,000-barrel-a-day petroleum coke processing unit and reported a series of pollution "flaring" episodes on Feb. 18, as well as Sunday, Monday, Tuesday and Wednesday.

"We do have excess emissions. Those excess emissions are under review for possible enforcement action," Rangan said. "There's no question about that, but they did a lot of things correctly, and things could have been a whole lot worse."

Refineries routinely used flares to burn off hydrocarbons or acidic gases when regular systems are interrupted or break down. The Environmental Protection Agency and DNREC barred routine use of flares, however, after complaints that companies needlessly dumped thousands of tons of pollution into the air each hour by flaring instead of preventing or controlling problems.

During the Feb. 16 incident, Valero was required to cut off coker production because it was unable to continue sending waste gases to systems that control carbon monoxide, sulfur dioxide, soot and other emissions. Some of the hot fluid eventually hardened in the system, however, snarling attempts to restart operations.

Delaware City's coker once ranked as one of the dirtiest refining units nationwide, releasing tens of thousands of tons of irritating sulfur dioxide to the atmosphere yearly, along with soot, nitrogen oxides and other pollutants. New scrubbing systems started operation in 2006 under the terms of a court-approved state and federal order, and DNREC barred the company from routinely bypassing those systems during breakdowns.

EPA records and past accounts of major problems at the refinery show that odors and pollution can wander for miles in any direction.

Pollution is one of the worst civil and constitutional rights violations. Beyond the technical aspects, the problem is legal and political. It occurred at a historically undefined moment when corporate special interest superceded individual sovereignty.

That is why Libertarians and Independents need to unite in a common effort to restore our republic.

I'm sorry, did I misread that? Hydrogen fucking CYANIDE?

When it was foisted on a sleepy part of lower New Castle County by J. Paul Getty circa 1953, things were different. Now 1000's of families and individuals live and work within close range of this site.

Why did thousands of people willingly choose to live and work there, then?

Reminds me a bit of people who move into homes next to airports and then seek to limit the growth of air traffic due to "all the noise."

Refineries are an important part of infrastructure -- there aren't enough of them as there is. While individuals have a right to expect their property not to be polluted, it's manifestly silly for people to willingly purchase or lease a home next to a refinery and then express "shock and outrage" when pollution happens.

Sorry, Brian, but the common environment we all share fungibly (i.e. air and water) especially in a narrow geographic area cannot responsibly be left to the good faith devices of commercial entities, operating as corporate fictions and dealing in heavy industrial, chemical, and hazmat activities.

Staking a claim to property before others acquire adjacent, adjoining or proximate property serves as no excuse for devaluing the lives or property of those latter property holders by releases of identifiably hazardous substance into the air or water or ground (to include the polluters's own ground).

As far as the assumed risk argument you rather weakly posit, this requires knowing the risk. Let's be real that no one should be expected to assume they are being poisoned by an industrial polluter.

You may have lots of room for that crap up in Pennsylvania, and God knows some of that south Philly industrial stench could knock a buzzard off a shitwagon in Chester, much less the overpowering stink over the bridges on either highway ingress.

Our boundaries are too small and population density too high to responsibly permit chronic polluters.

So GM is closing, Chrysler is laying off if not closing and you want to consider shutting down the only east coast refinery that can handle sour crude? Hold them accountable for violations. Make certain that the rules are enforced, However, recognize the strategic role this particular refinery plays in the overall production of refined product on the east coast.

When you say what chemicals are sent to flare recognize what exactly is released after the chemicals go through the flare. I am not giving the refinery a blank check to pollute, but neither should you give it a shut down notice without being honest about why and the impact on the state of those job losses and that tax income loss..