Cartoon Worth A Thousand Words... 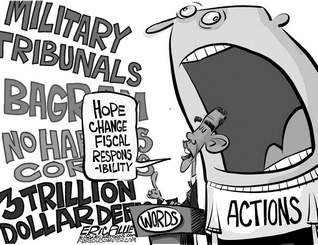 Credit : News-Journal
Posted by Tyler Nixon at 11:26 AM

Hey, here's a morning funny for you all:

Yesterday, Ron Paul, often cited as a "libertarian," was one of only two Republicans to vote in favor of Nancy Pelosi over the Waterboarding investigations. Nancy Pelosi, lifetime Libertarian Index ratings of virtually '0'; perhaps the most Authoritarian, anti-libertarian politician in America, and Ron Paul now supports her.

Meanwhile, up in Alaska, that pesky "conservative," who leftwing libertarians refuse to identify as a libertarian, gave a Big 'F' You to the Obama administration, by turning down $30 million in stimulus funds, cause it would require Alaskans to enforce Fed building codes on small businesses and private dwellings.

Now, turn on your trusty little libertarian website this morning, like Delaware Libertarian, and there's zero news about either of these events.

Run that by me again? Whose the libertarian and who's not?

Eric
Not that it matters, but I will take my extended vacation at the beach this week over fulfilling your supposedly obligations any time.

Eric - thanks for stopping by. Isn't coverage of these "events" what your blog is for? Why double up? Undoubtedly you will cover it. Personally I can't post about every thing that every other person is going to think relevant or important.

Honestly, the Pelosi vote means as much to me as Sarah Palin's doings in Alaska, which is jack squat.

Pelosi is doing far worse to the country than questionable blathering about the CIA and waterboarding. Christ, everything about Pelosi is questionable, to say the least.

Can't say I am informed about Paul's vote. Paul is doing far more for the cause of freedom than anyone else I see in the House. Nonetheless, perhaps he doesn't see the public efficacy in hunting this particular witch.

To conflate Paul's desire not to abide bullshit distractions like this Pelosi sideshow, while the country's going to fiscal hell in a deficit handbasket as one example, as "authoritarian" is patently absurd. That is just one good reason of which I can think, he may have others.

Anyway, have a great holiday weekend!

P.S. Hooray for Palin on any libertarian advances she brings Alaska. All the more reason to keep her up there (permanently) doing such a bang-up job.

Is Mr. Dondero attempting to argue that there's no criticism of Ron Paul on Delaware Libertarian?

Ummm... Eric dude, I am perhaps one of Paul's most infamous critics -- on actual libertarian grounds, not the far-right-fringe pro-war bullshit you try and pass off as "libertarian."

Perhaps you should start Delaware Neocon. Then you can blog rhapsodically.