Picture. Thousand words. You get the idea. 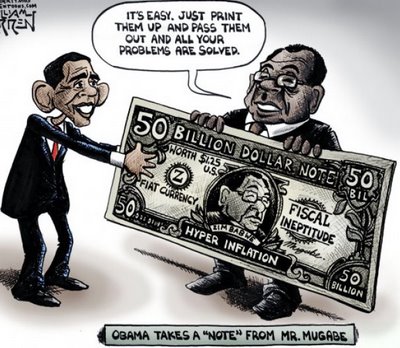 Careful, Steve! The DLers are gonna call you a racist!!

They won't have time, Hube, they are too busy ignoring the State budget controversy.

Of course, you're missing the murders, the expropriations, the collapse of health and education systems, the intimidation of the press and the judiciary, the casual corruption at the top, the riggged elections but aside from that it's an easy snark of one black president about another. One might expect better-

Waldo,
No--I'm not missing fundamental differences between the two societies--I'm pointing out one way in which we are becoming more like the failed states we used to deprecate.

And if you really think that even .0001% of my intent was to snark at two Black presidents, I'm disappointed, because you know better.

One might expect better-- can be therefore taken to mean that no critical editorial cartoons of Mr Obama will be considered in good taste if the only other person in the frame is Black?

It's you from whom I would expect better ... sense.