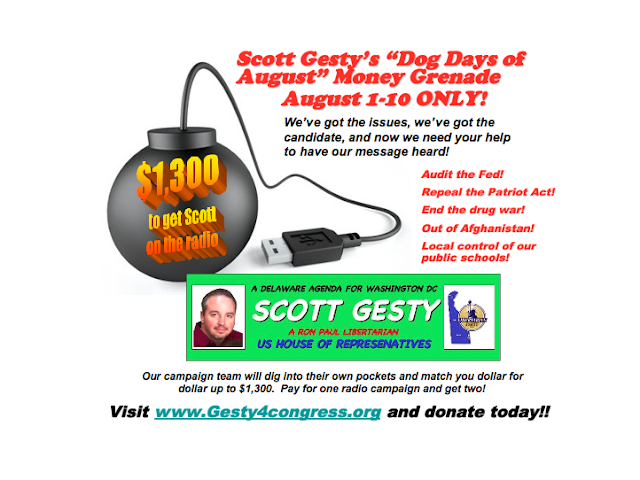 (If you are one of my out-of-state readers, be sure to see the note below):
A message from Scott Gesty:

To all supporters of Liberty:

I am happy to announce my first fundraising event.  We are calling it "The Gesty for Congress Dog Days of Summer Money Grenade"  It's not a 'Money Bomb' because we aren't looking for millions of dollars.  We have a targeted goal of raising $1,300 in the first ten days of August.  This is the amount need to place an Ad on a well listened to Delaware radio station sometime in the Fall.  We need your help to make history and put an Ad for a Libertarian candidate on the radio in the First State.

And I'm going to sweeten the pot.  You may recall that in 2010, I pretty much financed my run for State Representative out of my own pocket.  I really can't afford to do that this time around.  But, if you are willing to support this effort and put your hard earned money into my campaign, I feel I must do my part.  So for this event only, I will match your contribution dollar for dollar up to the goal of $1,300.   That's right, if click on that donate button on the website and donate $100, I will match that $100.  If I receive a check in the mail dated between August 1st and August 10th, I will match that too.

A $2,600 injection of capital into the campaign early on can set us on a course to do big things come the Fall. I'd like to thank you in advance for your anticipated support.

PS:  This is a ONE TIME event.  You won't see another one 4 weeks from now.  I'm not saying I won't accept or won't be asking for more donations down the road.  That's the nature of a campaign.  But this will be the ONLY Money Grenade Matching Funds event.  Events aren't special or have the same meaning if you do them over and over again.  Even I was tired of the Ron Paul Money Bombs after the 3rd or 4th one.

For Libertarians outside Delaware:  Many of you know the extent to which The Delaware Libertarian has supported you in the past--both with publicity and even contributions when I could afford it.

Now it's time to ask you to step up to the plate:  the putative GOP candidate in this race is so weak (his campaign "lacks a pulse," wrote one Delaware political commenter) that we have an excellent chance with Scott's campaign to make him the main competition for an incumbent Congressman--John Carney--that most of the Democrats don't even really like.

But we have to have the dollars to get Scott on the air to make it happen.  Exploding this money grenade and reaching $1,300 ($2,600 when we match it) will allow us to make useful buys at two Delaware radio stations.

Anything extra will go into signs, bumper stickers, you know the drill.  But we need some media, and we're going to have to make the orders in the last two weeks of August.

Got questions about Scott?  Go here and find out.

And--to be honest--expect me to be sending you a personal communication hitting you up.  Fifty people each ponying up $25 will get Scott's message on the air.  Go to Scott Gesty for Congress now, so you don't have to hear from me tomorrow.

So Gesty is a self-proclaimed "Ron Paul" Libertarian.

Of course, Ron Paul is an old racist Republican who opposes the civil rights act, believes that women don't have the right to control their own bodies, and thinks the separation of church and state is wrong, among his other whacky ideas.

Looking for private dog boarding and puppy care? In MO, Ballwin, Chesterfield, Manchester, and St. Louis Furbaby animal care center provides you all the services that you are looking for your adoring pets.