"He's dreaming," said Larry Sabato, director of the University of Virginia Center For Politics. "The debate committee is run by the two (major) parties. They had to let in Perot because at one point he had 40 percent of the vote."

This is, of course equally true of the University of Delaware's Center for Politcal Communication (directed by Ralph Begleiter) that is the supposedly non-partisan entity co-sponsoring this year's statewide debates in Delaware: 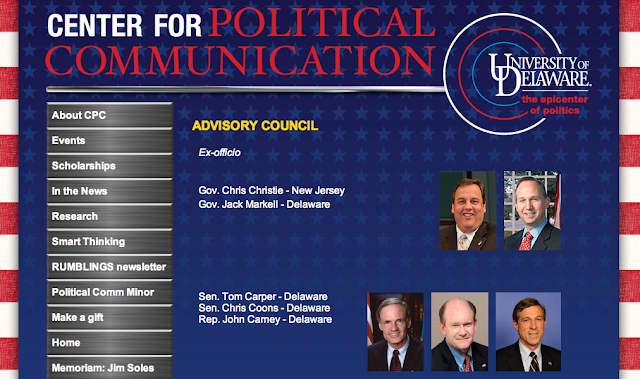 It is important enough to keep restating:  the eligibility requirements that Mr. Begleiter and Michelline Boudreau (President of Delaware First Media, the other co-sponsor) are NOT non-partisan.

They have consciously adopted standards that will exclude all other candidates beyond members of their own Advisory Council and their doomed Republican challengers, who do not really belong to a major state party any more.

In others words, unless Mr. Begleiter and Ms. Boudreau make the (unlikely) decision to allow the other ballot-qualified candidates like Alex Pires and Scott Gesty onto the stage, it's time for them to admit that they are simply partisan shills for the Democratic Party.
Posted by Steven H. Newton at 11:22 AM

This article made the NJ today. Thanks for the plug.