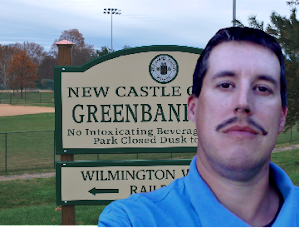 The 7th Senate District looks different to James Christina than it does to Senator Blevins.

That's because he sees it on foot, every day.  He's one of the victims of the Great Recession, lost two jobs in the past year, trying to make ends meet.

He walks around the district as he campaigns because he can't afford to keep a car on the road.

"Funny thing," Christina says, "I'm a big guy, you'd think people would see me.  But I've been nearly run down four or five times by people in fancy cars, talkin' on their cell phones.  I guess they just don't see me."

Christina doesn't think that the incumbent, Senator Patti Blevins, sees people like him, either, and that's why he's pursuing an admittedly longshot bid to unseat her.

"She got her hand so deep into redistricting that nearly all the Republicans were moved out of her area," Christina says.  "The GOP didn't even bother to run anybody against her this year.  I think that's wrong.  If the Republicans claim to be a major party, they ought to be giving the voters a choice."

Christina admits that his passion comes with rough edges sometimes.  "I say what I think, and I'm never going to win any prizes for my writing.  But that's not the point."

The point to Christina is that there shouldn't be a Senator so highly placed on the Joint Finance Committee in a closed budgeting process that steers thousands of dollars each year to the charity she runs.

The point is re-districting should have been done on a non-partisan basis, not with the bald political intent of securing a Democratic majority in the General Assembly forever.

The point (and when Christina says this, his face reddens) is that there have been millions of dollars available to the "suits" who started Fisker and who have thus far failed to produce either cars or jobs in Delaware.

He's an unorthodox candidate, but in 2010 he managed over 11% of the vote in a State Representative race, which--as a Libertarian--is a strong showing.

"People get tired of the same old same old sooner or later," Christina says, "and I'm going to tell the Republicans, 'sorry,' I'm the one who has been here all the time when you wrote the district off."

You can meet James Christina (and, he says, even make a campaign contribution) tomorrow between 5:30-7:30 at the clubhouse at The Apartments at Pike Creek, 100 Red Fox Lane, Newark DE 19711.

It will be worth the conversation.
Posted by Steven H. Newton at 10:31 PM