Oops, we've reached the point where the government may need to step in and make satire illegal

Free Wood Post obvious wants to be The Onion.

The satirical "news" site posted this "Romney response" to a question about why he had not joined the military to serve in Vietnam:


“That’s a good question, young man, and I would be happy to answer it. The Vietnam War came at a time in my life when I had other plans. I knew in my heart of hearts that I would one day serve my nation. That I would one day hold an office that would help not only our nation, but also the world. So I did what I could to make sure that I would be around to serve my nation, as well as serving God by teaching very important religious principles to a broader audience overseas. My father did not want me serving, and he convinced me that yes, I was too important to go to Vietnam. I had a greater purpose in life. I wasn’t neglecting my nation, but rather preparing myself for a future of service.”

All over the country people picked it up as legitimate news.  There are multiple Daily Kos diaries that have now been "deleted by the author" that embarrassed themselves by falling for the story.  One of the few similar entries that has not been scrubbed is over at Democratic Underground, where the person posting finally realized that this was satire but left it up with a disclaimer.

What's interesting there is that, as this screen shot of the comments indicates, we've reached the point where whether the candidate actually said it or not does not matter to a lot of folks who think it sounds like something he really thinks, or would have said.  So they are OK with the idea of tarring him with it anyway: 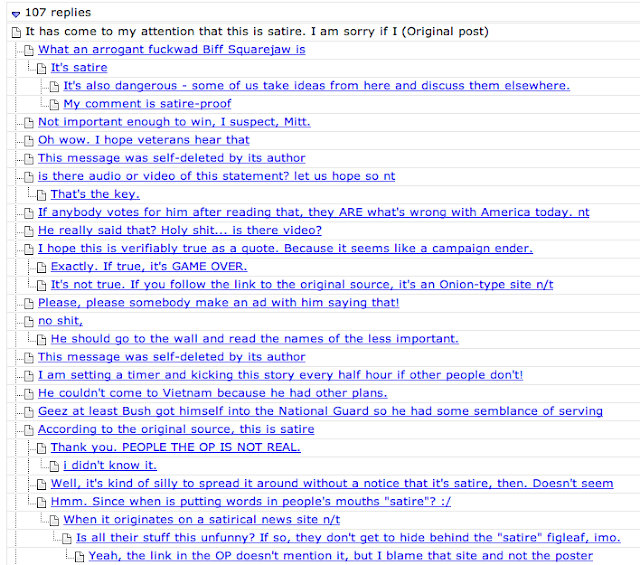 I defend the right of every author to embarrass his audience. You can't scold someone into checking into the news before passing it on, but embarrass them just once in a big way, habits change... We need more, not less.