No, he may be a conservative, but he's not a Libertarian 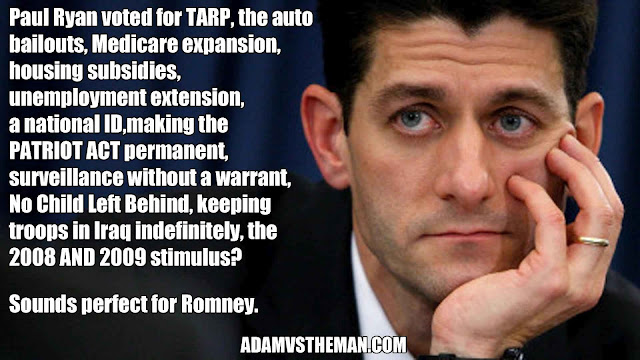 LOL. You can't make this shit up.

Just good manners, something I suspect the folks at Delaware Libertarian can appreciate.

In what universe is Paul Ryan "our friend"?

The whole point of this post is that, by his actions, he is clearly no friend to libertarians.

Why should we care what the "Liberal Media" that you so often rail against think? Why do you?

No, Eric. YOU can't make this shit up. Steve does just fine on the creative front. That is part of why it is interesting to read his work. And how is that for coming to defense of a friend (online variety Steve, I'm not claiming any familiarity I don't posess )

Tom, you're not a libertarian, so what do you know? You're a typical leftist America-hater who has infiltrated our libertarian movement.

Anonymous, why not post under your real name? Are you too pussy? Geeky guy living in your mom's basement there on the outskirts of Wilmington, Elsmere, Claymont or Prices Corner, maybe?

Have the courage of your convictions and post under your real name.

Anonymous, why not post under your real name? Are you too pussy? Geeky guy living in your mom's basement there on the outskirts of Wilmington, Elsmere, Claymont or Prices Corner, maybe?

Have the courage of your convictions and post under your real name.

Eric, you've totally won me over with your charm, wit, and well crafted logic.

I'm going to become a dedicated reader and frequent commenter on Libertarian Republican.

And by the way Eric, I love the irony of you telling someone to use their real name.

Only a fool thinks "libertarian" is some sort of species. It's a relative term. Sadly, most of the assholes who want to be considered "libertarians" care more about losing than winning.

Shit, my secrets' out! Damn you Eric!

Eric Dondero is a foul-mouthed ninny. Go troll somewhere else.

This blog is for Delawareans, not national campaign rejects and sycophants.

Correction: Ayn Rand was not a "Libertarian," as in Capital 'L'. You're right. She despised the early Libertarian Party members. She thought they were too enamored with the cultural Left at the time.

But in later years she refrained from attacking Libertarians.

Hmmn? Anonynous says this blog is for DELAWAREANS? Might surprise Anonymous to know that I lived for 12 years of my life in Delaware. Virtually all of my family and friends live there. I've been there on and off for the past few weeks. And I even had a nice lunch at the Charcoal Pit near Prices Corner with the very owner of this Blog... Steve Newton.

Oh, and this little side note, interesting, I went to Hebrew School for 6 years with Jack Markel, now Governor of Delaware. And his - hot! - sister was my Hebrew School teacher for two years in the late 1970s.

DOGFISH HEAD (from Milton, Delaware) IS THE ONLY BEER I DRINK!!!

Tom, my real legal name is:

I choose to shorten it at times to just Eric Dondero. Gotta problem with that?

But I do have problems with: Your aggressively ignorant bigotry; your absurd misunderstanding of libertarianism & complete intolerance toward anyone who doesn't share it; your long history of pissing off and alienating everyone you come in contact with; the depths to which you will descend to avoid answering a simple question; your tendency to be the first to introduce name-calling and foul language into otherwise civil discourse and to dismiss anyone who dares to disagree with you an "islamofascist" or some similar complete non sequitur; and finally, your glorification of militarism and desire to involve the U.S. in every possible or imaginable war.

but congratulations, you've been abnormally civil and polite so far today.

are you back on your meds or something?

Dude, I was a libertarian way back when you were in diapers. I'm an original libertarian from the 1980s. I remember when the libertarian movement was Pro-American, and anti-Communist, before it was taken over by a bunch of weenie-ass America-hating leftists.

All I'm trying to do is win the libertarian movement back to the days of John Hospers, Dana Rohrabacher, Jack Wheeler, Darlene Brinks, and the more pro-defense/Pro-America viewpoint.

I served my country for 4 years in the United States Navy. Where and when did you serve?

If you didn't serve asshole, I WOULD THANK YOU FOR THANKING ME FOR MY SERVICE TO THE UNITED STATES OF AMERICA.

Foul language? I can speak any goddamned way I choose too. I earned that right through 4 years in the Military.

If you're too much of a pussy-boy to handle Military talk, than I suggest you go find yourself a little spa there somewhere's on the northside of Wilmington, that will paint your toenails, and put cucumbers in your eyes, while listening to Barry Manilow music.

Us real men will hang out here at Delaware Libertarian while your getting your toenails clipped and your bottom of your feet scrubbed.

I'll defend libertarians, but when the media paints some asshole I can't stand as a libertarian when I know full well that he isn't, I will distance myself from the asshole, not defend him just because Chris Matthews and his ilk decide to lump us together. What you seem to be missing, Eric, is that they're using Paul Ryan to discredit libertarians, not using the "libertarian" label to discredit Ryan.