Interestingly enough, the Democrats are no longer claiming to be the party of civil liberties 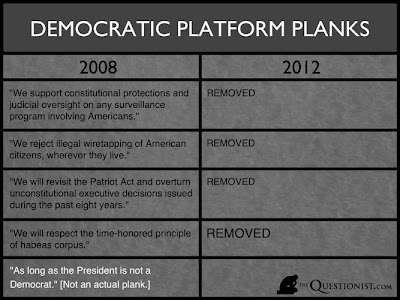 This speaks to the thread on Delaware's (uppercase)democrat / fake liberal blog.

Well they certainly didn't stop making this claim on the basis that it is and always has been complete and utter hogwash.

Other than their obsession with protecting abortion under any circumstance and a very brief flirtation with criminal defendant protections around the 1970's the Democrats have never known a civil liberty they wouldn't toss overboard in a heartbeat to advance government power and their control.

Now that they have finally just come out as full-blown national socialists the absurd pretense that they ever gave a shit about civil liberties has actually become counterproductive to their lying, scheming and propagandizing.

Ironically this admission (or omission really) is probably the only honest thing their party platform has ever revealed about what their true value are.

Didn't you just say that nobody cares about party platforms? So now you do , too?

Good catch, Steve. Vote Green Party this year. Gary Johnson is just another sore-loser republican, as have been all of the Libertarian Presidential Candidates.

Don't force me to point out all the sheer nutcase crap in the Green platform A1.

I would consider voting for several different Greens around the country, including Andy Groff, but not based on their platform.

Platforms are generally useless, but I thought it was interesting that Democrats would find it necessary to strike out their support for civil liberties.

"Platforms are generally useless, but I thought it was interesting that Democrats would find it necessary to strike out their support for civil liberties."

Platforms are useless except as running statements of what the party wants the world to believe they're about, i.e. their bullshit.

If the GOP, for example, omitted national security from its platform it would be a damn significant statement revealing far more about them than anything you'd learn from any party platform claptrap.

And with the Democrats, their lack of giving a shit about civil liberties is now so pervasive that even their most shallow pro forma propaganda has finally caught up with the reality of who and what they really are.