Ahhhh.....but what of red-headed Neanderthals??

One of my best friends in life is a (flaming) redhead. I kid him quite a bit about it.

Say what you will of our red-headed freak sisters and brothers (I'm looking right at you, Mat Marshall), but the ones I know are among the smartest people I know.

That said, did we really need DNA to "reveal" this?

Ancient DNA retrieved from the bones of two Neanderthals suggests that at least some of them had red hair and pale skin, scientists report this week in the journal Science. The international team says that Neanderthals’ pigmentation may even have been as varied as that of modern humans, and that at least 1 percent of Neanderthals were likely redheads.

The scientists — led by Holger Römpler of Harvard University and the University of Leipzig, Carles Lalueza-Fox of the University of Barcelona, and Michael Hofreiter of the Max Planck Institute for Evolutionary Anthropology in Leipzig — extracted, amplified, and sequenced a pigmentation gene called MC1R from the bones of a 43,000-year-old Neanderthal from El Sidrón, Spain, and a 50,000-year-old individual from Monti Lessini, Italy. 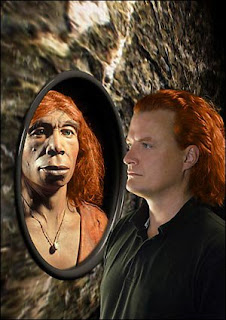 Neanderthal and proud, my dear boy. Although we do tend to need around 40-50% more anesthetic when undergoing medical procedures. Still, there is a lot of truth to the old adage "red on the head equals fire in the bed."

LOL. I forgot about the "needs more anesthesia" thing with you crimson tops.

The question is who do you more resemble in the mirror picture?

In Prince Harry's Paki/raghead video one soldier has the gumption to ask, "Are your pubes ginger, too?"

This explains an awful lot.

Alas, once again: another post points out an additional perk for remaining anonymous.