Another Hopeful Development in Producing Hydrogen - The Fuel of the Future 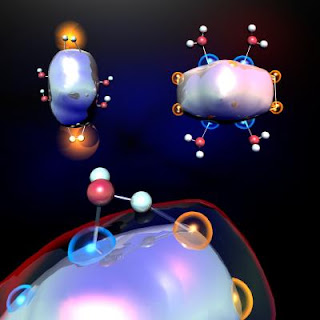 "Scientists at Penn State University and the Virginia Commonwealth University have discovered a way to produce hydrogen by exposing selected clusters of aluminum atoms to water...The team's findings will be published in the 23 January 2009 issue of the journal Science.

"Our previous research suggested that electronic properties govern everything about these aluminum clusters, but this new study shows that it is the arrangement of atoms within the clusters that allows them to split water," said A. Welford Castleman Jr., Eberly Family Distinguished Chair in Science and Evan Pugh Professor in the Penn State Departments of Chemistry and Physics. "Generally, this knowledge might allow us to design new nanoscale catalysts by changing the arrangements of atoms in a cluster. The results could open up a new area of research, not only related to splitting water, but also to breaking the bonds of other molecules, as well."

The team found that the aluminum clusters react differently when exposed to water, depending on the sizes of the clusters and their unique geometric structures. Three of the aluminum clusters produced hydrogen from water at room temperature. "The ability to produce hydrogen at room temperature is significant because it means that we did not use any heat or energy to trigger the reaction," said Khanna.

"Traditional techniques for splitting water to produce hydrogen generally require a lot of energy at the time the hydrogen is generated. But our method allows us to produce hydrogen without supplying heat, connecting to a battery, or adding electricity. Once the aluminum clusters are synthesized, they can generate hydrogen on demand without the need to store it."

The team plans to continue their research with a goal of refining their new method. This research was supported by the Air Force Office of Scientific Research.


More and more breakthroughs like this, involving non-electricity-derived hydrogen extraction by refining nanotechnologies, bode wonderfully for a clean hydrogen future. Especially promising are any developments in the ability to produce hydrogen for use on demand, versus use from stored hydrogen.

Whether it comes on-demand or from continuously-replenished storage, hydrogen will be the cleanest, cheapest, most adaptable and widely-applicable fuel for a stable energy future.

Hydrogen can be used as fuel for internal combustion engines and any other combustion-derived energy, namely heat. It is also used in fuel cells to produce electricity. In all instances the only by-product is pure water, whether vapor or liquid.

With these novel new methods of producing hydrogen from water, users will be able to produce their own 'source' fuel at their point of use rather than, for example, plugging into the traditional electricity grid or fueling-up at a station.

Hydrogen for combustion and for use in fuel cells will provide a far more realistic answer to our energy demands because hydrogen is fuel itself. Proposed 'solutions' like electric cars (EV's) only shift the burden to a still fossil-fuel-driven electricity grid in the short-term and renewable energy resources in the long term.

Electric cars obviously rely on electricity being produced from somewhere. Their fuel is not the electricity that charges them but whatever is used to produce that electricity, whether coal-burning, nuclear, natural gas, solar, wind etc.

Maximizing renewable energy technologies is the only permanently-sustainable energy future. Someday the oil and gas will all be gone. For better or worse, the renewables we will have to use are pretty much a zero sum proposition. We simply can't, at will, expand the base supply of source fuel, at least for the most prevalent renewables : sun and wind energy.

1000's of electric cars coming online, while we are still producing our electricity largely with fossil fuels like coal, may shift us from petroleum use, but would certainly no better for the environment and presents an entirely new and growing strain on a slowly-developing clean energy grid.

As electricity is increasingly produced by and demanded of renewable energy technologies, which are inherently-intermittent resources, the need for electricity 'conservation' or more conservative use will become more profound.

A mass proliferation of electric cars will only serve to drain capacity away from renewable resources more needed and better used for the electricity demands of dwellings and businesses instead of cars.

Of course, there are also the problems of travel range and remote re-fueling with EV's. The notion that we can just plug these cars into any available electricity source involves a whole mess of problems as to how EV owners will access and pay for electricity coming from a source other than their own home or business.

Ideally, a future smart grid may solve such issues but the solutions will be far more complicated and long-in-coming than may be worth a major up-front investment, when hydrogen can be so much more readily produced and used, pretty much the same way gasoline and petroleum-based fuels are, and without involving the technical novelties and challenges of EV's.

People being what they are (often irresponsible) I can only imagine the issues that will come to our roads when people routinely run their electric cars down while out driving, whether out of oversight or neglect or inaccessibility to electricity 0r just being stuck in traffic for too long, just as people run out of gasoline every day. With electric cars, though, you can't coax the car along on fumes or, when finally empty, just grab a little gas can, pour it in, and drive to the nearest fueling station.

We would be smart to look past the rather self-defeating designs to convert to more electricity usage for vehicles, especially on the bogus pretext that this is somehow freeing us from fossil fuel use. Just because EV's may be novel and futuristic hardly makes them desirable or optimal. That is, unless long-term clean, renewable, sustainable energy resourcing is not in fact the 1st priority of those pushing them. EV proponents may not like it, but the bottom line is that in the foreseeable future EV's will only make Delmarva Power and their like that much happier with their bottom lines.

Now, despite the above-mentioned issues there is still a substantial place for EV's in the future transportation mix, especially hybrid EV's in the short term. But right now we have reliable and ubiquitous (99+% of all vehicles) combustion engine technology capable of being fitted or retro-fitted to run on hydrogen. Such conversions are a far more realistic and less costly solution than looking to produce brand new electric cars by the millions.

Notably, this hydrogen research was funded by the Air Force. It is an example of worthwhile public investment that will hasten a clean energy revolution and bring energy independence not just to nations but to individuals the world over.

We can immediately begin moving to total conversion from fossil and dirty energy resources to clean hydrogen, as fuel both for mobility and electricity production. Hydrogen technology research and developments are well worth "stimulating", given our emerging era of unfettered "stimulus" spending by a massive national government.

We can only hope such stimulus spending gets it right on clean energy, embracing technologies based on scientific merit and optimal results rather than on politics and pork.

While the U.S. Govt. wasted millions on ALTFuel cars, many manufacturers are ready to go with Hydrogen. BMW has one ready for market, the H7. Fuel availability is key, so BMW is working on that, too.

As the beemer peeps say, "Determined to bring the power of hydrogen to the world, our initiative goes far beyond the vehicle itself. We are already collaborating with a wide range of dedicated partners, from global fuel distributors and fuel technology companies to government agencies and environmental groups. Today in Germany, there are five liquid hydrogen refueling stations - and soon there will be two in the US. Developed with Linde AG, they are virtually as easy to use as normal gasoline pumps."

Are there any notable dangers, Tyler? (I'm thinking Hindenberg here!)

And what about the ultimate hydrogen fuel: Fusion?

Hydrogen is extremely (and I do mean extremely) flammable, but the effect is reduced because of hydrogen's low density: it tends to rise quickly before it can ignite.

The Hindenberg death toll is a bit more complex than just "hydrogen!". Many of those deaths were jumpers. Some others were trapped. You shouldn't need to jump out of your car. And while it's possible to become trapped in a burning hydrogen car, it's not automatically more likely than becoming trapped in a burning petrol fuel car. Hydrogen fire goes up; you wouldn't have to worry about a fuel spill on the ground being an issue.

Hube, I am with you on fusion. It would leap us forward to an entirely new ball game in energy production.

I have been following fusion developments for many years. You should look into the saga of how the Bush administration and certain heavy-players (looking for gobs of government money for hot fusion research), along with mainstream media piling-on, mounted a concerted campaign in 1989 to totally discredit Pons' and Fleischmann's cold fusion research, effectively killing it for the last 20 years.

Fifteen years later : "In 2004, the US Department of Energy was sufficiently encouraged by experiments in cold fusion – or low-level nuclear reactions, as they labelled them – to recommend research into exactly what was occurring. A department memo suggested that more research be performed on “evaluating the experimental evidence presented for the occurrences of nuclear reactions in condensed matter at low energies”.

"May 06, 2007
Science
Tjeerd writes in to alert us to the publication in a highly respected, peer-reviewed journal of results indicative of table-top fusion. The US Navy's Space and Naval Warfare Systems Center in San Diego, CA (called Spawar) has apparently been conducting research on "cold fusion" since the days of the discredited report of Pons and Fleischmann. They are reporting on the reproducible detection of highly energetic charged particles from a wire coated in palladium-deuterium and subjected to either an electric or a magnetic field. Their paper was published in February in the journal Naturwissenschaften (which has published work by Einstein, Heisenberg, and Lorenz)."

It is typical to see science become secondary when billions in government largesse is the real goal.

Hydrogen isn't a source of energy, it's merely a storage medium FOR energy.

You still have to have energy produced in order to create hydrogen storage. And that means lots and lots of nuke or coal plants.

Did you even read the article, Brian?

It is all about non-electrolytic means of producing hydrogen.

As far hydrogen being merely energy "storage" versus energy itself, I think you are stating the obvious without making any point.

For all our intents and purposes, stored energy = energy.

Every conceivable fuel is merely an energy "storage medium", in a sense, including the sun.