Exactly how has John Carney spent his time in Congress?

Not passing meaningful legislation, that's for damn sure.

During his first two years in the US House, up until April 2012, Representative Carney had sponsored exactly six pieces of legislation and three amendments to other people's bills.  Two of his amendments passed, which is good, because nothing else Carney sponsored got anywhere.

Meanwhile, after sponsoring nothing since 31 January of this year, Represenative Carney suddenly got busy in April, sponsoring no fewer than twenty-five pieces of legislation, virtually all designed to temporarily remove tariffs from a variety of pharmaceuticals, footwear, and inkjet cartridges.  Yeah, that's right: 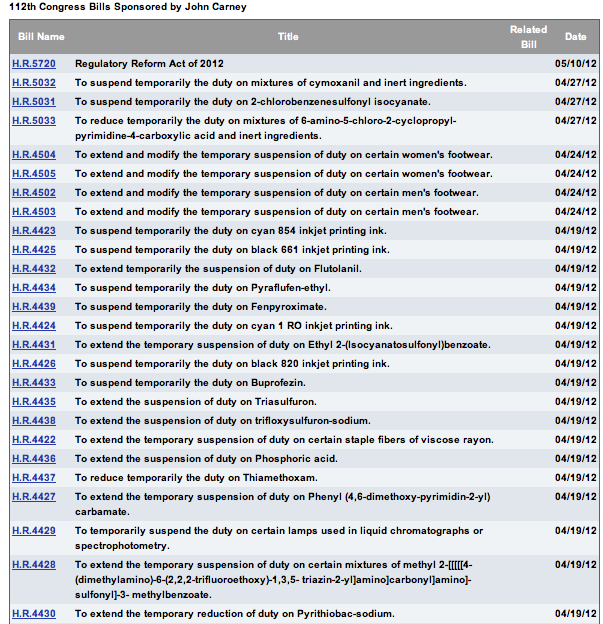 FYI all have been referred to committee, where they continue to languish.

Among Representative Carney's groundbreaking co-sponsorships in his first term are such winners as:

Now I suppose it is entirely possible that Representative Carney was so busy working on representing Delaware citizens on other critical pieces of legislation that he just didn't have the opportunity to do much in the way of introducing legislation.

We will find that Rep. Carney expressed his displeasure with some parts of the Affordable Care Act (Obamacare) by voting to exempt corporations from reporting requirements in the original law.  Wouldn't want corporations to have to write too much, would we, sir?

Oh, and Rep. Carney found time not once but no fewer than four times to vote for extending provisions of the Patriot Act in whole or in part.  Damn those unpatriotic civil libertarians, anyway.

He also found time to vote for the National Defense Authorization Act of 2012 that includes the provision for the indefinite detention of American citizens, while he voted against such horrible pieces of legislation as requiring the President to follow the War Powers Act in committing troops abroad, or reducing the Defense budget at all, or even a Balanced Budget Amendment (which, oddly, he had sponsored in a very similar bill a few months earlier--see above).

For completeness sake, Rep. Carney also voted to allow the President to commit ground troops into Libya if so inclined, against ending the war in Afghanistan, and to raise taxes on Social Security recipients.

Just thought you'd like to know how one-party representation of Delaware is working out in our Congressional delegation.
Posted by Steven H. Newton at 11:40 PM

Steve, you cannot run around showing what out elected officials do! This is Delaware and we play nice, you know, the Delaware Way.