While we're all waiting for the Libertarian Party of Kentucky to finish shooting itself in the foot, and in the head, and in the chest, and in the groin over its idiotic waffling on the question of withdrawing its support of Sonny Landham, I thought maybe you'd find this entertaining.

Kevin Craig is running as a Libertarian candidate for the US House of Representatives in Missouri's 7th Congressional District.

Classically Liberal takes on his platform in detail, but I think you can get all you need to know in about four sentences from Craig's website:

The entire creation is God's enterprise.

God is the Boss.

But at least he's not calling them anti-Christ yet.

Sad to say, the same thing can't be said about Dell Schanze, Libertarian candidate for Governor in Utah, as (again) Classically Liberal points out:

According to news reports the Libertarian Party candidate for governor of Utah, Dell Schanze, was using an automatic dialing service to send taped messages to a few thousand voters per day. He was attacking the incumbent governor for being an “anti-Christ”. ... 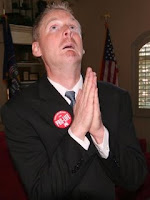 Willy Starr Marshall, the Libertarian former mayor of Big Water, Utah, said that Schanze was unfit for the LP nomination because of his attitudes against gays, non-Mormons and other minority groups. One report says Marshall referred to an unaired radio commercial that Dell cut for his computer store in which he called gays “faggots” and “tinkerbells” and promised $100 off purchases to customers who are “rude and abuse to homosexuals."

So if we put Kevin Craig, Dell Schanze, and Sonny Landham together on one ticket (in the spirit of the Boston Tea Party we might call it the Mad Hatter's Party--somebody's obviously been sucking the mercury out of that felt), maybe it would act like those sting operations the police in DC used to run by sending everybody on their outstanding warrants list a note that they'd won free Redskins tickets.

We could get them all together in one room and hope the mother ship stopped by.

CLS reaches this conclusion after dealing over the past week with all three stories:

Yes, I considered my position about the Libertarian Party, and once again it has proven itself unworty to continue to exist. Incidents like this with LP candidates has again shown the LP to be a liability and detrimental to the furthering of liberty in the United States. It is a worthless entity. Its leadership is clearly either unlibertarian, unable to control their own party, or merely political whores wanting attention for any message that generates publicity. It is not the “Party of Principle” as it used to claim to be. It is the party of bigots, morons, lunatics and loosers. I pity the real libertarians who still cling to the hope that it can turn around.

Even though the LP nominated a presidential slate that I cannot support, I disagree.

Even though the LP is rotten at the top levels of the national organization, I disagree.

Even though several of the LP state parties have gone so far afield to find candidates that they've recruited pure whackjobs, I disagree.

Why? Mike Munger in North Carolina. Allen Buckley in Georgia. Jason Gatties in Michigan. Tyler Nixon (hopefully) in Delaware. Eric Schansberg in Indiana. Lillian Simmons in Texas. Tom Knapp in Missouri. Thibeaux Lincecum in Maryland (even though his special election is already over).

Yeah, we've got a chameleon at the top, unjust ballot access laws at every turn, and crazies coming out of the woodwork.

So what else is new?

Nobody said this was going to be easy.

I like the last line: "nobody said this was going to be easy. Just important."

Also, kudos for highlighting those perverting the cause. We are a big tent, but god and governance don't mix, unless your God is a libertarian.

"Even though several of the LP state parties have gone so far afield to find candidates that they've recruited pure whackjobs ..."

To the best of my knowledge (and I believe that knowledge to be extensive in this matter), the Missouri LP did not "recruit" Kevin Craig to run for Congress.

When Classically Liberal says that the Missouri LP is "letting" Craig run on its ballot line, he's speaking from ignorance.

Under Missouri's election laws, the Missouri LP has no control whatsoever over who files to run as a candidate in its primary elections, or over the fact that those who win said primary elections become the party's nominee for the office they're seeking. It doesn't "let" people run on its ballot line except to the extent that it chooses to participate in the only electoral system available to it. Once it reached that decision, it became bound by the rules of said system.

Finally, while I strenuously disagree with Craig's religious views, and while I consider his use of them in his campaign both bad strategy and damaging to the party, it is worth noting that he's not in the same league as Sonny Landham. Landham advocates the collectivist use of US military force for the purpose of genocide in order to facilitate stealing other people's property. Craig is an anarcho-capitalist who wants to abolish the state altogether, not use it to enforce his religious views or kill people he doesn't like.

It is only the sanction of decent libertarians, within the LP, that keeps this happening over and over.

When The popular comment layout is common, so it is easily recognized scanning to post a comment. If the comment section is in a different format, then I am going to spend more time trying to decipher what everything means.