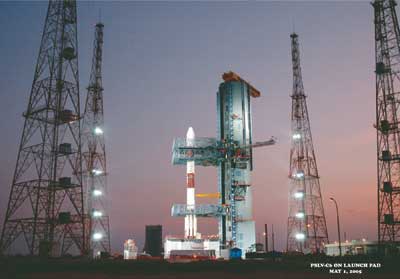 NEW DELHI -India rejoiced Saturday at joining an elite club by planting its flag on the moon as the country's space agency released the first pictures of the cratered surface taken by its maiden lunar mission....

To date only the U.S., Russia, the European Space Agency, Japan and China — and now India — have sent missions to the moon.

The Indian Space Research Organization [ISRO] has a record that would make (and should) make NASA blush.

From India Scribe Spot [fairly long, but worth it]:

Why does India, a poor country, want to explore the moon instead of using that money to alleviate poverty?

That was the question raised six years ago when India’s space agency ISRO (Indian Space Research Organisation) asked the government for $65 million to build and launch an unmanned scientific spacecraft to circle the moon....

The project ... will cost $2.2 billion in the first phase to put an Indian in orbit by 2014, and at least twice as much in the second phase to land him or her on the moon by 2020 - four years ahead of China.

If planetary exploration is ISRO's long-term goal and manned space flights are a prerequisite for this, why not team up with Russia or the US rather than go it alone?...

Rao doubts if collaboration would work in the area of human space flights given the constantly shifting geopolitical equations and the fact that manned activities in space do have a commercial angle.

"We have to develop our own capability like the Chinese have done."

Self-reliance, in fact, has been the hallmark of ISRO, especially after the US and Europe banned the export of space technologies to India following its first nuclear test in 1974.

This turned out to be a blessing in the long run as it drove ISRO to reinvent technologies it could no longer buy....

ISRO's quest for self-reliance has extended to other areas as well. This year, it began setting up a $320 million navigation satellite system to reduce the country's dependence on US owned Global Positioning System (GPS) satellites.

But the real jewel in ISRO's crown is its constellation of seven remote-sensing satellites - two will be added next year - the world's largest.

Sale of its images worldwide generates $7 million in revenue to Antrix Corporation, ISRO's commercial arm. Within India, scientists have used the satellite pictures to combat deforestation, monitor desertification, and predict crop yields and to locate groundwater and increase fish catch.

Thanks to the INSAT network of nine communication satellites - the biggest in the Asia-Pacific region - 90 percent of Indians can watch television, get daily weather forecasts and disaster warnings.

The "super-cyclone" that hit India's eastern coast on Oct 29, 1999, could have killed thousands but for an INSAT satellite that tracked its course every half hour identifying areas that needed to be evacuated.

According to Nair, ISRO is keen to share the benefits of remote sensing with other developing nations. It will build and launch in 2009 the TWSAT (Third World Satellite) that will beam imageries for use by select developing countries.

In 2004, ISRO pulled off a world first, launching Edusat, a 'teacher in the sky' that now connects 2,300 classrooms in the country. And what started in 2001 as a pilot telemedicine project - bringing health care to the rural areas via satellite - now links 165 smaller hospitals across the nation to 33 speciality hospitals in major cities. This means the patient in a village can get the best medical advice without travelling huge distances.

And with production lines for two types of rockets - PSLV and GSLV - India has also carved a place in the launch business.

It has launched small satellites for Belgium, Germany and South Korea and has payloads of European Union, Argentina, Israel, Singapore, Indonesia, Canada and France awaiting launch by 2008 end. The commissioning of the $95 million second launch pad at Sriharikota in Andhra Pradesh state last year was in anticipation of the boost in launch business, says ISRO....

Remarkably, ISRO has been able to do all this with an annual budget of $660 million - three percent of what the US space agency NASA spends in a year....

In 1981, when ISRO scientists were transporting their first communications satellite APPLE to the launch pad on a bullock cart, sceptics wondered if a primitive country could really harness advanced technology.

We ignore large parts of the world at our peril--economic as much as military.

While we've been investing billions for very little return of any value in Afghanistan and Pakistan, one of the consequences has been the progressive cooling of our relationship with India.

During which time, India's Tata Motors has developed the world's cheapest car, the Nano, and France has stolen a march on the US by cutting deals to sell nuclear and military technology to India.

What does this failure to pay attention cost us?

Here's the answer from one of the readers of that post on the ISRO:

Since when did India become a poor country?!!! We Indians are predicted to be the 3rd richest country in the world by 2020!!! Right now almost every country depends on India. 35% of Micrsoft consists of Indians & many of NASA's employees are Indian. You cannot call us the 'p' word from now on. Are the Americans scared and trying to pressure us into abandoning our highly advanced space programme?

Even 6 NASA satellites were launched by ISRO's rocket on 24th of October!!!

TOO MUCH COMPETITION, EH?

Worth thinking about.
Posted by Steven H. Newton at 10:14 PM