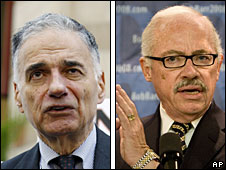 I was reading this rather bland Political Machine report on Senator Barack Obama agreeing to three debates with Senator John McCain (sponsored by the Commission on Presidential Debates), when it occurred to me: it may well be in Barack Obama's best interest to accept Bob Barr and Ralph Nader in these debates.

Sound counter-intuitive? Perhaps, but then again...

Here's what the article notes in a kind of conventional wisdom passing way:

The agreement by the Obama campaign to three debates carries a risk for the candidate. Obama is a relative newcomer to national politics, and the election is becoming a referendum on his ability to fulfill the requirements of the office of president. Three debates means more chances for a mistake that could cost him the full confidence of the voting public. The same is true for McCain; but he will enter the debates with lower expectations than Obama, and a better sense among voters of what to expect from him. Both candidates will try to lower expectations before the debates. Based on the auras surrounding each campaign, however, it will be Obama who will bear the burden of proof to the electorate.

1) Barack Obama did not do particularly well in the one-on-one debates with Senator Hillary Clinton; in point of fact, he generally looked more confident and more poised in the multi-candidate debates before John Edwards and Mike Gravel dropped out.

2) Inviting Bob Barr into the debates (or at least one of them) is a no-lose strategy for Obama. Yes, Barr will take shots at both of them, but he is clearly going to score more hits on McCain, and--more to the point--McCain will not be able to ignore him. Every second that John McCain spends defending himself from Bob Barr is a second he's not laying a glove on Barack Obama.

3) Inviting Ralph Nader into the debates is a low-risk strategy for Obama, because Nader really doesn't possess the ability to hurt Obama like Barr can hurt McCain. If anything, Nader will obligingly make Obama look like more of a centrist.

4) Senator Obama would be able to get away with such a call for the inclusion of third-party candidates with a statement that his entire campaign has been about listening to new voices and trying new approaches. If he's really smart, he'll hold out to have the third-party candidates in the town hall format debate, which is the one that most favors McCain.

The Democratic Party organization would not like this tactic at all. They still haven't gotten over blaming Nader for costing Al Gore the election in Florida in 2000. But it is important to remember that if Senator Obama is serious about adopting Howard Dean's concept of the 50-state strategy, then the Democrats have to count on third-party candidates to siphon off votes in some key battleground states [Georgia, North Carolina, Virginia, and Michigan immediately come to mind].

Here's what the Barr and Nader campaigns should do. As the only third-party candidates actually showing up in national polling at all, they should send a joint open letter to both Senators McCain and Obama asking the Demopublican candidates to agree to their inclusion in the debates. Frankly, I think it would even be worth it for the two campaigns to collaborate on a joint debate advertisement [with sincere apologies to Mike Munger for stealing one of his best lines]--

Barr: There's obviously a lot that the two of us don't agree on.

Nader: But we stand together on this: limiting the choices of American voters to only two presidential candidates is harmful to democracy.

Barr: And that's exactly what the Democrats and Republicans, through the supposedly non-partisan Commission on Presidential Debates has done. By imposing an arbitrary polling requirement of 15%--usually in polls that only give the respondents two choices and "undecided"--these two parties have decided NOT to let voters see that there are other serious options in this year's General Election.

Nader: You may not like my positions on the issues, and you may not like Representative Barr's. That's okay: if you hear us and don't like us, we lose a vote. If you never get to hear us, you lose a choice.

Barr: It's important that you know that in early polling, whenever given the opportunity, a growing percentage of likely voters have rejected the default choices of Democrat or Republican, and have selected either Mr. Nader or myself. If these percentages hold up, they represent millions of Americans. Those voters deserve the opportunity to see the candidate of their choice in nationally televised debates.

Nader: Representative Barr and I have written a joint letter to the Democratic and Republican presidential campaigns, asking for their support in opening up the debates to us. We're asking you--whether you're a Republican, a Democrat, or a member of a third party--to join us in respectfully requesting that Senators Obama and McCain insist to the Commission on Presidential Debates that the two of us be invited. Fair and open elections are an American tradition; help us keep it alive.

--that in the current atmosphere I suspect the mainstream media would actually cover.

This would place both Obama and McCain in a difficult position. McCain, a former foot-soldier in the Reagan revolution could be reminded of the famous "I paid for this microphone" line when candidate Reagan insisted that lower-polling opponents be included in a debate. Obama would have to face another instance in which his claim to be a new kind of candidate would be revealed as rhetoric rather than reality.
Posted by Steven H. Newton at 11:29 PM

Have you considered sending this plan to Bob Barr? He might just take it under advisement. I think it's brilliant.