Libertarian Barbara Howe stands up for LGBT couples in North Carolina: where are Pat McCrory and Walter Dalton?

Barbara Howe and her husband Tom will shred their marriage license in front of Legislative Hall to protest North Carolina's Amendment One that outlaws gay civil unions and same-sex marriage.

“I am just heart sick that the people of North Carolina have written discrimination into the Constitution,'' Howe said in a statement. “Constitutions are to limit government, not people. I'll be working on repealing this abomination.''

So, one wonders, while the Libertarian candidate leads, where is Democrat Walter Dalton or Republican Pat McCrory, the other two candidates for Governor?

And can we expect to see Barack and Michelle do the same as Barbara Howe when they visit Charlotte this summer for their coronation?  Rhetorical question, of course.

We all know the answer. 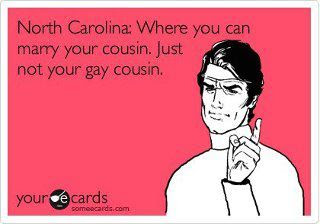