This is a must watch dose of hard truth from Penn Jillette about our self-admitted formerly cannabis-smoking, "blow"-snorting President who chuckles away merrily about his violent, destructive war on people, over some arbitrarily government-unblessed substances.

Had "Black Jesus", as David Axelrod privately calls Obama, been on the receiving end of his own treatment, as are millions of otherwise peaceful, peaceable Americans - 100's of 1000's of whom are rotting in prisons this minute everywhere in this country (if not being ground up and ground down somewhere within the narco-enforcement police-prosecution-prison industry), his career and his life would have been senselessly ruined for no reason other than to justify the self-serving cowardice and willful ignorance of soulless politicians...like he is now.

Oh yeah, sure, Obama's cool.  Like a warm bucket of piss.


JILLETTE: "What troubles me about this... I think it's beyond hypocrisy. I think it's something to do with class. A lot of people have accused Obama of class warfare, but in the wrong direction. I believe this is Obama chortling with Jimmy Fallon about lower class people. Do we believe, even for a second, that if Obama had been busted for marijuana -- under the laws that he condones -- would his life have been better? If Obama had been caught with the marijuana that he says he uses, and 'maybe a little blow'... if he had been busted under his laws, he would have done hard f*cking time. And if he had done time in prison, time in federal prison, time for his 'weed' and 'a little blow,' he would not be President of the United States of America. He would not have gone to his fancy-a** college, he would not have sold books that sold millions and millions of copies and made millions and millions of dollars, he would not have a beautiful, smart wife, he would not have a great job. He would have been in f*cking prison, and it's not a god damn joke. People who smoke marijuana must be set free. It is insane to lock people up."

h/t RealClearPolitics: The Drug War & Obama's Drug Use: What Troubles Me - Penn Jillette 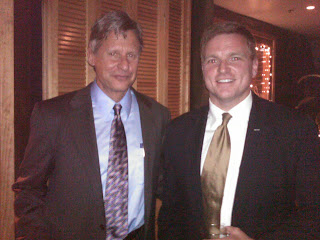 Congratulations to Delaware Libertarian's godfather, Steve Newton, on reaching 3000 posts here (2900 something of which are his....800 just in the last week, I' believe! *HAH*)

What an honor to be associated with him.  Thanks Steve!
Posted by Tyler Nixon at 2:31 PM

Thanks pandora! You're my favorite lady blogger in the whole world and the tops all around, period. It means a lot to hear from you, always.

P.S. 3000 posts is probably nothing for you guys over at DELiberal. But it is incredible when you consider it was seriously the power-blogging of pretty much one guy over maybe 3 or 4 years actual blogging time. I couldn't possibly keep up with him, even just trying to ingest and absorb the prolific results of his massive brain power.

I hope this is the restart of the original "fusion" between us.

GREAT to see Tyler back in the house! Hope you're doing well, bro!

And in case anyone's actually counting, it was 2.5 years of actual blogging w/ a 1.5 year break in the middle.