I realize the folks involved with the Gary Johnson presidential campaign are busily preparing for the Libertarian national convention, so you can expect everything else to be on hold (especially since "no nomination" = "no campaign, so why bother"). 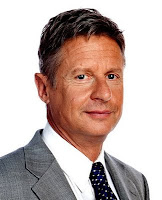 So I thought it would be a good time to take a look at the campaign organization and operation until this point.

The front-page with the nostril-hair large photo of Gary's head behind "The two-party is over" message doesn't work that well for me, and it always annoys me to have to click through it to get to the main site.

Once there, the site is well-organized, though perhaps a bit static.  The "Issues" is where I almost always go first, especially with Libertarian candidates.  Why?  Because it's right there that you can separate the people running vanity campaigns and the people running what I call "libertarian instruction" campaigns from the people who would actually like to win an office.


(In what I call the "other-than-seriously-fighting-to-win" categories, you often get cut-and-paste sections of the LP platform or single sentences promising to abolish the Department of Education, Labor, Health and Human Services, and to privatize everything.  These are not people that interested in getting votes.)

Gary's Issues section is pretty strong on foreign policy, on taxes and the economy, on immigration, and etec.  You may not agree with him, but there is coherence to his views, and they are elucidated in what I would call "presidential depth."  His page comparing the candidates' views is also excellent.

His Education section, however, left me cold.  Part of the reason is probably the intensity and general wonkishness of public school debates in Delaware, which go into way more detail than anybody would realistically ever want.  Gary's Education page says only this,


“I am a strong supporter of school choice. Without federal regulations and mandates, teachers, parents, and their local representatives would have the freedom to decide how and where funds are allocated. Competition in education will drive innovation and improve student performance.”


OK, Governor, with all due respect, that's a slogan and not a platform.  Here's something more along the lines I'd expect from a serious "mainstream" libertarian candidate, that builds off of something you've been talking about (and even if you don't like this one, the real one should have this much specificity--education wonks vote):

The Federal Government now intrudes in public education in every way possible.  The Department of Education has mandated the "voluntary" adoption of "Common Core Standards" that, backed up by high-stakes testing and regulatory restrictions, is strangling the creativity and quality that American teachers have traditionally brought into the classroom.  At the same time, the Federal Government pours uncounted billions into trendy programs while blithely ignoring the fact that it has NEVER fully funded its own Special Education program for some of our most challenged kids.

This needs to STOP.  Whether it is No Child Left Behind or Race To The Top, it needs to stop.

Instead, this is what the Federal Government should be doing with Education:

--Providing resources instead of restrictions.  Federal tax money that returns to state and districts should come with as few strings attached as possible.  Push that money down into the classrooms:  we spend enough on education that every child should have his or her own laptop--what each student has now is his or her own personal bureaucrat.

--Stop the madness of high-stakes testing.  Constantly changing (and hideously expensive) standardized tests that impact school funding are leaching the creativity and personal responsibility of teachers right out of our classrooms.  They haven't improved education; they've created another government-dependent cottage industry of data coaches and rubric writers.

--Encourage innovation, not comformity.  Contrary to bureaucratic belief, no single solution works everywhere.  We need to loosen the laws that prevent experimentation with vouchers, choice, charters, and magnet schools, and we need to stop treating conscientious homeschooling parents as pariahs.

IMPORTANT NOTE:  This is NOT Gary Johnson's Education Agenda, this is me writing a "what-if" possible agenda for a serious Libertarian candidate (who might have served two terms as Governor of New Mexico)

Not being picky, but when you sign up for email, twitter, or text message updates, something should be going out from the campaign every single day.  72 hours and--nothing.

Likewise, State coordinators (whom I realize are doing this as a labor of love on their own time, ok) need to answer emails or phone calls from potential volunteers within a day or so.  Not happening (and this is not only my experience).

Applying for Federal matching funds:  A

I don't care about the philosophical arguments; get the money.  It has already been taken from me, and I'd rather have you use it right now than anybody else.

Judge Gray brings important features to the ticket, not the least of which is his potential to help the LP get into the 150,000-200,000 vote range in California, and his ability to mobilize marijuana legalization advocates nationwide.

Staying in the News:  B+

Appearing on Colbert, challenging Bloomberg on "Stop and Frisk," and playing the media over his VP pick have all been good.  But Google and the other news aggregators need at least one (if not two or three) new stories every single day. We need to know where Gary Johnson is today, and what he's talking about, and with whom.  Those of us who blog will get it out there, but you've got to get it to us. (And every time Gary shows up at any percentage in any poll, there better be a news release.)

I know it's unfair to judge when Gary doesn't even have the nomination, but presidential politics IS both unforgiving and unfair.  I'm looking at a standard of wanting to see Gary in a presidential debate, and while that is barely attainable, it requires damn-near error-free campaigning to get there.


The materials are there, but I am still concerned with the vision.  Not the candidate's vision, the campaign's vision.

A lot of people are aching for a third-party candidate they can support who can run a real campaign.