Libertarians for Peace and Gary Johnson: Ideology versus Reason

LFP is a strongly non-interventionist faction within the Libertarian Party, which hews strongly to the position taken by LP founder David Nolan in 2009:

My fellow Libertarians, our party is at a crossroads. Either we stand up boldly for liberty, or we lose all relevance. The voters who want real, meaningful, substantive change will direct their energies elsewhere, while opportunists who seek short-term electoral victories will support the Republican and Democratic politicians who offer a far better chance of "winning now." I urge each of you to bear these thoughts in mind during your upcoming meeting.


In that vein, LFP issued the following assessment of Johnson's foreign policy positions:

We applaud candidate for presidential nomination Governor Gary Johnson’s strong opposition to the war in Afghanistan but want to hear him speak even more firmly against entangling alliances; unequivocably against the U.S. supporting in any way an Israeli or U.S. attack on Iran; in full support of the U.S. quickly shutting down of Guantanamo detention camp and all foreign bases, as well as bringing all U.S. troops home. These positions have brought massive support for Republican Presidential candidate Ron Paul - and the Libertarian Party candidate certainly can do no less.


Before I analyze these points seriatem, it is important to make the point that Governor Johnson has made several times:  if you actually want millions of people to cast ballots for you for president you have to take the question of foreign policy seriously, as a real-world issue, and not as some sort of ideological litmus.  For example, in his recent interview with The Weekly Standard, Johnson refused to give a pat answer on exactly how much the defense budget should be cut: 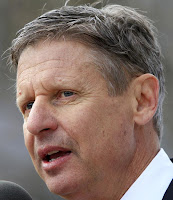 Is Johnson saying that the United States defense budget should be cut in half?


This is important, because you don't just get to cite the Libertarian Party platform as a credible Presidential candidate when the men and women in the US armed forces are the wives, husands, sons, daughters, sisters and brothers of the millions of people voting.

So with that in mind, let's take the LPF points:

1.  LPF wants to hear him speak even more firmly against entangling alliances.


What Johnson says:  "The U.S. must make better use of military alliances which allow greater sharing of the human and financial burdens at less cost of protecting national interests."

Commentary:  the person inaugurated as President in January 2013 inherits not a tabula rosa but a real world with history.  We have allies in the world, and commitments we have made to them:  Great Britain, Japan, Israel, South Korea, etc. etc.  A real-world president who attempted to repudiate rather than re-define those existing relationships would be acting illegally and would quickly become unable to govern.

2.  LPF wants Johnson to speak unequivocably against the U.S. supporting in any way an Israeli or U.S. attack on Iran.


What Johnson says:  “I think that we really do have a vested interest in Israel and that we shouldn’t walk away from that interest.” [Weekly Standard] “Am I not correct in saying that Iran has never voiced that they are developing a nuclear weapon, nor do they have any intention of using a nuclear weapon against the United States?  That’s never actually been voiced. I don’t know where that has come from, but it hasn’t been from Iran.” [Daily Caller]

But if Iran has developed nuclear weapons:  “Iran launches a nuclear warhead they can be assured that they will no longer exist.  None of their country will be left to stand and that will be from Israel,” [Daily Caller]

Commentary:  Johnson's position does not support an Israeli attack on Iran; it supports Israel's right to retaliate if force is used against it.  At the same time, Johnson refuses to jump past the actual evidence and condemn Iran based on unproven charges of developing a nuclear weapon.  Again, responsible.

3.  LPF wants Johnson to speak  in full support of the U.S. quickly shutting down of Guantanamo detention camp and all foreign bases, as well as bringing all U.S. troops home.

What Johnson says: "Decades after the collapse of the Soviet Union, American troops remain scattered throughout Europe. It is time to reevaluate these deployments." [Foreign Policy position on website] "No criminal or terrorist suspect captured by the U.S. should be subject to physical or psychological torture.  Individuals incarcerated unjustly by the U.S. should have the ability to seek compensation through the courts.  Individuals detained by the U.S., whether it be at Guantanamo Bay or elsewhere, must be given due process via the courts or military tribunals, and must not be held indefinitely without regard to those fundamental processes." [Foreign Policy position on website]“Where strategically should we be? You would think that strategically we should be in the Middle East." [Daily Caller]  “I don’t want to close the door that if any of us were President of the United States that we would sit idly by and watch something like the Holocaust go down.  I don’t want to close the door on the United States involving themselves and putting a stop to that. Can we spend money on that? Yeah, I think so.” [Daily Caller]

Commentary:  Complete isolationism has never been a viable foreign policy even in the Taft school of diplomacy.  A strong bias toward non-interventionism, a respect for international law, and a critical understanding that there are shipping lanes, trade routes, and other valid but limited strategic interests throughout the world is a remarkable re-orientation of the foreign policies heretofore practiced by both Presidents Bush and Obama, and advocated (on alternate Tuesdays and Thursdays) by Governor Romney.

4.  LPF wants Johnson to speak out on these particular issues because Ron Paul did?  These positions have brought massive support for Republican Presidential candidate Ron Paul - and the Libertarian Party candidate certainly can do no less.

Commentary:  WTF?  Ron Paul's support may appear massive by LP standards, but--newsflash!--Ron Paul is running for the GOP nomination and getting only about 10-13% of the vote.  Much of that these days includes Santorum diehards who realize that supporting Paul is now the only way left to oppose Romney inside the Republican Party. And it is frankly arguable that it is Ron Paul's impractically extreme foreign policy views that keep his more sensible economic views from gaining any traction.  Instead of a rEOVLution, Governor Johnson seems intent on running an actual PRESIDENTIAL CAMPAIGN.

Yet for all that I would come down on the side of Governor Johnson's positions rather than the formulaic platform literalism of Libertarians for Freedom does not mean their ideas are not valuable nor that their challenge to Johnson is not important.  It is arguably on foreign policy that Johnson has yet to find his most effective voice.
Posted by Steven H. Newton at 10:54 PM

Steve, this question is not directed to you, because you are rational. But any diehard non-interventionists out there.

I say this in all sincerity.

What is the difference between y'all's position and that of complete surrender to our enemies?

Honestly, I don't see even a smidgin of space between what you all advocate, and a complete handover of the United States to our Communist and Islamist enemies around the globe.

What are you talking about?

Do you seriously think "Communist[s] and Islamist[s]" are the ones who are off-shoring American jobs?